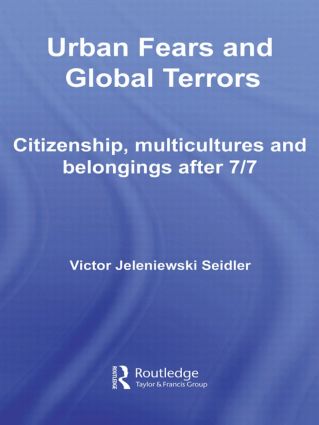 Urban Fears and Global Terrors After 7/7 explores the disruption around that day, taking people back to the events and the sense of loss, fear and mourning that followed. By framing a new landscape of urban fear Victor Seidler shows how new technologies helped to shape responses to a global terror that had been anticipated but was dreadful in its reality. By listening to the narratives people shaped for themselves Seidler shows the need for new forms of social theory that can come to terms with the contemporary realities of urban fear, complex identities and belongings. This book:

This book will prove an incredibly useful resource for students and researchers of Political Sociology and Citizenship, Diaspora Studies, Terrorism and Political Violence, Cultural Theory, Ethics and Philosophy.

Victor Jeleniewski Seidler is Professor of Social Theory in the Department of Sociology, Goldsmiths College, University of London. He has written widely in areas of social and cultural theory and philosophy.