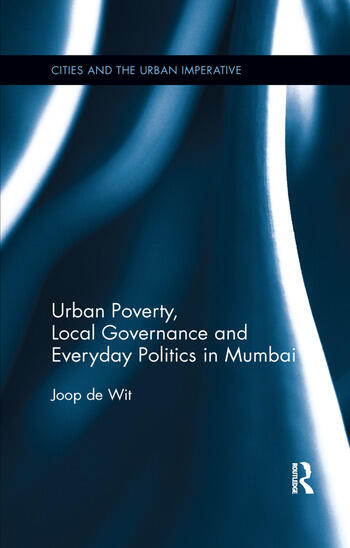 This book explores the informal (political) patronage relations between the urban poor and service delivery organisations in Mumbai, India. It examines the conditions of people in the slums and traces the extent to which they are subject to social and political exclusion. Delving into the roles of the slum-based mediators and municipal council

Preface. List of abbreviations. Introduction 1 Locating Mumbai‘s poor in urban governance, politics and informality 2 Mumbai megacity: city, people and governance changes 3 Included and excluded: Mumbai‘s poor and slum dynamics 4 Political entrepreneurs: the Mumbai corporators in their political and financial context 5 Politics or poli-tricks? Local democracy and slumvoting in the 2012 Mumbai municipal elections Conclusions: the poor pray for miracles, the rich think they have a right to them. Glossary. Bibliography. Index

Joop de Wit is Senior Lecturer in Public Policy and Development Management, International Institute of Social Studies of Erasmus University (ISS), The Hague, The Netherlands. An anthropologist, his research interests are political science, governance, policy issues, urban poverty and decentralization. He has published the books Poverty, Policy and Politics in Madras Slums: Dynamics of Survival, Gender and Leadership (1996) and New Forms of Urban Governance in India: Shifts, Models, Networks and Contestations (co-edited with I.S.A. Baud, 2008) as well as numerous articles.

"De Wit notes the implications of money politics, or patronage democracy, for the infl uence of the private sector and big business in Mumbai’s governance, as well as how it limits the overall capacity of the poor to mobilise for better services. This leads to one of his most important conclusions, that examples of 'effective, sustainable common action is actually rare' (p 274)."

"The book will be eye opening to urban planners interested in slums and urban informality regardless of how familiar they already are with the Indian context.What is clear is that, as this book argues, no policy or intervention is likely to be effective unless it is founded on a deep understanding of the political economy at play between slum communities, local politicians, and the state."

"Ultimately, de Wit argues that political interests of both voters and politicians are marked by short-termism, and are not ideologically grounded. He identifies several factors limiting the effectiveness of organized advocacy among slum residents, including sharp divisions between groups, weak leadership, and defensive rather than rights-based action."

'…the book is rich in ethnographic data including in areas difficult to collect data on (such as the details of ward-level corruption), and so this book will be useful to scholars, researchers and students of social anthropology, urban studies, urban sociology, political science, public policy and governance, as well as urban practitioners and policymakers. It is recommended reading for scholars with an interest in mega cities development and in Mumbai in particular.'