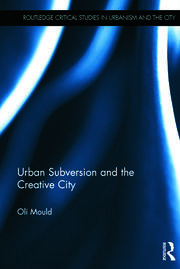 This book provides a comprehensive critique of the current Creative City paradigm, with a capital ‘C’, and argues for a creative city with a small ‘c’ via a theoretical exploration of urban subversion.

The book argues that the Creative City (with a capital 'C') is a systemic requirement of neoliberal capitalist urban development and part of the wider policy framework of ‘creativity’ that includes the creative industries and the creative class, and also has inequalities and injustices in-built. The book argues that the Creative City does stimulate creativity, but through a reaction to it, not as part of it. Creative City policies speak of having mechanisms to stimulate individual, collective or civic creativity, yet through a theoretical exploration of urban subversion, the book argues that to be 'truly' creative is to be radically different from those creative practices that the Creative City caters for. Moreover, the book analyses the role that urban subversion and subcultures have in the contemporary city in challenging the dominant political economic hegemony of urban creativity. Creative activities of people from cities all over the world are discussed and critically analysed to highlight how urban creativity has become co-opted for political and economic goals, but through a radical reconceptualisation of what creativity is that includes urban subversion, we can begin to realise a creative city (with a small 'c').

Prologue: The Man upon a Wire  Chapter 1. Introduction 2. Creating a Scene – The Need for a Creative City 3. The Creative Class(ification) of Cities 4. Quartering Creativity – Real Estate in the Creative City Interlude: The Rubble of the Creative City 5. Preparing for Flight 6. Urban Subversion 7. The Places of Subversion 8. creative city trajectories Epilogue: Climbing Wooly Bibliography

"Urban Subversion and the Creative City is Oli Mould’s bold plea for truly creative urban thought and action … Creative, that is, in a wide range of subversive but always social ways, and not only outside but against the softly suffocating hegemony of authorized versions of the Creative-Cities script, in all its banal ubiquity. Not before time, this is the creative city turned upside down." Jamie Peck, Canada Research Chair in Urban & Regional Political Economy and Professor of Geography, University of British Columbia

"The Creative City of neoliberal urbanism has met its match: In this fascinating, meticulously researched, truly global book, Oli Mould introduces us to the creative city of subversion and desire. A much needed act of liberation from the official terrain occupied by the creative class." Professor Roger Keil, Faculty of Environmental Studies, York University, Canada.

"Oli Mould is a legendary scrapbooker of all things urban, and the city itself - its benches, billboards, pavements, parks - is his raw material. This book is the product of many years of quiet but critically discerning rambling through diverse urban places and through eclectic academic ideas. Mould has painstakingly traversed both the world's iconic and ignored cities, collecting and photographing, asking questions and talking with those who make cities genuinely creative places - not the cashed-up hipsters, Creative City policy wonks or think-tank 'expert' authors of glossy strategic plans, but the activists, artists and ordinary people on the street whose desire to use the city to other ends make meaningful life out of concrete, brick and bitumen. This book is a rare insight into how to think the creative city differently, a book that crackles with conflicting voices, but always sees the city as a space of possibility." Chris Gibson, Director, Global Challenges Program and Professor in Human Geography, University of Wollongong, Australia

"The work is thorough, engaging and critical in spirit, and is packed full of theoretical insights and colourful examples of what the author calls ‘urban subversion’. Mould is keenly immersed in his subject matter, and his enthusiasm for it is both obvious and infectious. This is a book which every human geography and urban sociology student should read, and would enjoy at the same time." - Robert Hollands, Newcastle University, UK