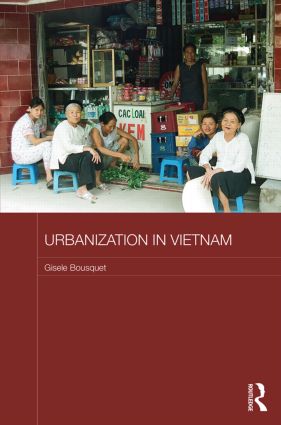 Most studies on urbanisation focus on the move of rural people to cities and the impact this has, both on the cities to which the people have moved, and on the rural communities they have left. This book, on the other hand, considers the impact on rural communities of the physical expansion of cities. Based on extensive original research over a long period in one settlement, a rural commune which over the course of the last two decades has become engulfed by Hanoi’s urban spread, the book explores what happens when village people become urbanites or city dwellers – when agriculture is abandoned, population density rises, the value of land increases, people have to make a living in the city, and the dynamics of family life, including gender relations, are profoundly altered. This book charts these developments over time, and sets urbanisation in Vietnam in the wider context of urbanisation in Southeast Asia and Asia more generally.

"The book's most compelling insight is how women in particular gained new economic power, especially in their role as daughters who remained in the village, upending the long-standing emphasis on patrilocality. While the book’s scope is limited to one setting, it provides a comprehensive portrait of how these residents responded to the encroaching city and reconfigured their livelihoods and economic activities in response."

'Drawing on a wealth of historical information on Hanoi and sixteen years of fieldwork in thiscommunity, Bousquet explores the social, spatial, and economic transformation of this “urbanvillage”…extremely valuable works by an experienced field worker that contribute a great deal to the growing corpus of excellent work in the anthropology of Vietnam.'

Introduction 1. Urban Spatial Reconfiguration 2. Land Tenure, Property Rights, and Urban Development 3. Farming at the Edge of the City 4. Making a Living in the City 5. The Urban Village 6. Gender Relations in the New Urban Landscape Conclusion

Gisele Bousquet is a Lecturer in the University of California Extension, Berkeley, California State University East Bay, and the College of Alameda, USA