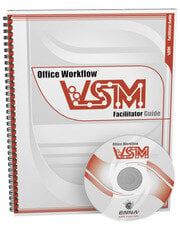 The Value Stream Mapping Facilitator Guide provides the structure needed to help guide the Facilitator through the VSM Office process. It is designed to let you communicate and lead the process of developing your Current and Future State Maps. This allows you to perform your workshops with confidence and lead change internally.

Mrutyunjaya Panda is a Reader in the Department of Computer Science and Application, Utkal University, Bhubaneswar, Odisha, India. His areas of research included: Data Mining, Intrusion Detection, Mobile Communication, Social Networking, Sensor Network and Image Processing. He has a Doctorate from Berhampur University in Computer Science with Master of Engineering from University College of Engineering, Burla, Bachelor of Engineering from Utkal University in Electronics and Tele-communication engineering and Masters in management from IGNOU, New Delhi. He has 16 years of teaching and research experience. He has published more than 50 research papers in various journals and conferences, and has authored 2 textbooks on soft computing and data mining, edited 2 books for Springer in Social Network and Swarm Intelligence. He acts as a program committee member of various international conferences. He is an active reviewer for Elsevier, Springer, WSEAS journals and serves on the editorial board of many journals.

(Abo) is a Professor in Faculty of Computers and Information, IT Department, Cairo University, and the chair of the technology center of blind and visual impaired people. Abo has a B.Sc. with honours (1986) and M.Sc. degree (1993), both from Ain Shams University, Faculty of Science, Pure Mathematics and Computer Science Department, Cairo, Egypt. He obtained a doctoral degree from the Department of Computer Science, Graduate School of Science & Engineering, Tokyo Institute of Technology, Japan in 1998.

He has authored/co-authored over 160 research publications in peer-reviewed reputed journals, book chapters and conference proceedings. He has served as the program committee member of various international conferences and reviewer for various international journals. He has received the excellence younger researcher award from Kuwait University for the academic year 2003/2004. He has edited many special issues for international journals. He has directed many funded research projects.

is the Director of Machine Intelligence Research Labs (MIR Labs), USA which has more than 1,000 scientific members from over 100 countries. As an Investigator / Co-Investigator, he has received research grants worth over 100 million US$ from organizations in Australia, USA, Europe, Malaysia and China. He works in a multi-disciplinary environment involving machine intelligence, cyber-physical systems, Internet of things, network security, sensor networks, Web intelligence and applied to various real world problems. He has authored / co-authored more than 1,300+ research publications of which over 100 books are on various aspects of Computer Science. Over 1000 publications are indexed by Scopus and over 700 are indexed by Thomson ISI Web of Science. He has 700+ co-authors originating from 40+ countries. Dr. Abraham has more than 30,000+ academic citations (h-index of 81 as per google scholar). He has given more than 100 plenary lectures and conference tutorials. Since 2008, he has been the Chair of IEEE Systems Man and Cybernetics Society Technical Committee on Soft Computing (which has over 200+ members) and served as a Distinguished Lecturer of IEEE Computer Society representing Europe (2011-2013. Currently he is the editor-in-chief of Engineering Applications of Artificial Intelligence (EAAI) and serves/served the editorial board of over 15 International Journals indexed by Thomson ISI. He is actively involved in the organization of several academic conferences, and some of them are now annual events. Dr. Abraham received his Ph.D. degree in Computer Science from Monash University, Melbourne, Australia (2001) and a Master of Science Degree from Nanyang Technological University, Singapore (1998). More information at: http://www.softcomputing.net