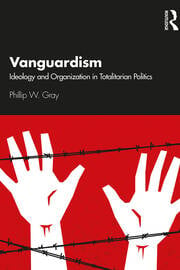 Providing an innovative conceptualization to extremist political movements founded upon "world-historic" populations and vanguard party organizations, Vanguardism sets out a new path in investigating the intellectual and historical influences that created extremist politics, the totalitarian movements and regimes of the twentieth century, and a framework for interpreting extremism in the present.

Expanding its view across the turbulent intellectual currents of the nineteenth century, Philip W. Gray illustrates how these ideas shaped the shared ideational and organizational structures that would develop into Leninism, Fascism, and Nazism in the early twentieth century. Moving beyond the Second World War, the book explicates how vanguardism did not vanish with the war’s conclusion, but was modified throughout the period of national liberation movements and Western extremist groups over the ensuing decades. Concluding in the present with an eye to the future, Gray presents a framework for comprehending the extremist movement of today, and how organizational shifts can give us clues to the forms of totalitarian politics of tomorrow.

Original and provocative, Vanguardism will become essential reading for everyone looking to understand totalitarianism and extremist politics of our time.

3. The Prehistory of Vanguardism

9. Conclusion: Transition to What?

Phillip W. Gray is an Assistant Professor at Texas A&M University at Qatar. Previously, he taught at numerous institutions in Hong Kong as well as at the United States Coast Guard Academy. His research focuses on research ethics, comparative political ethics, extremist organizations and ideology, and terrorism.

"‘Vanguardism’, a new animal joins the menagerie of political concepts, but thanks to Phillip Gray’s combination of inventiveness and scholarship, this one adds to our understanding of the deep mythic logic behind extreme illiberal movements and states which still tend to be dismissed as nihilistic, barbaric, or ‘evil’, and underestimated as an existential threat to the hegemony of liberal democracy. His book thus has a resonance far beyond the cloisters of academia and extends not just to the genocidal politics of Bolshevism and Nazism but to the bombed-out cars of Iraq and the weaponized vehicles of European capitals." — Roger Griffin, Emeritus Professor in Modern History, Oxford Brookes University

"Vanguardism is a timely, readable, and important book. It establishes Phillip Gray as one of the world’s leading experts on political extremism." — George Hawley, Associate Professor of Political Science, University of Alabama

"In this book Phillip Gray makes an important contribution to the study of political radicalism and extremism. He does so by expanding the attention given to ‘vanguardism’ and, more saliently still, by substantially innovating that concept. By taking his cue from recent studies of totalitarianism – but making a good case that his implications go far beyond it – Gray successfully shows the range of political phenomena to which vanguardism applies. Thereby, in addition to repackaging the familiar twentieth-century examples, Gray has interesting things to say both about recent ‘subaltern’ variants of vanguardism (focused around colonised peoples and racial minorities) and, in phenomena like identity politics, its potential mainstreaming." — Richard Shorten, Senior Lecturer in Political Theory, University of Birmingham