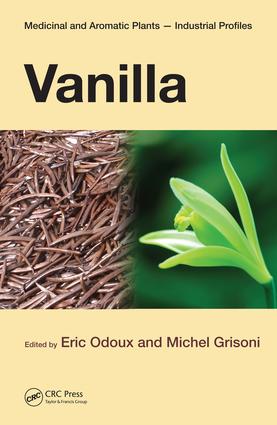 Vanilla is a legacy of Mexico and, like chocolate, it is a major global delicacy representing almost a half-billion Euros in profits each year. Written under the editorial guidance of renowned field authorities Drs. Eric Odoux and Michel Grisoni, Vanilla presents up-to-date reviews on the cultivation, curing, and uses of vanilla. It provides unique

Eric Odoux graduated in biochemistry and had a career in Cirad (French Agricultural Research Centre for International Development) since 1988. He successively worked on coffee, cocoa, aromatic plants and tropical fruits processing in Cameroun (and other West Africa Countries) and in France before to develop a research project on vanilla curing in 1996 in Reunion Island and Madagascar. His main research axis has focused on vanilla aroma development related to curing practices. He received his PhD degree in Food Sciences from University of Montpellier II (France) in 2004. His work led to research in partnership with industry, to consultancy reports and to scientific articles.

Michel Grisoni graduated in agronomy and holds a PhD degree in Plant pathology from Montpellier SupAgro (France). He has been conducting a carreer as agro-virologist for CIRAD (French Agricultural Research Centre for International Development) since 1984 in Colombia, French Polynesia and Reunion Island. His research on vanilla focused primarilly on pests and diseases then moved towards the caracterization, preservation and development of genetic resources, in particular to improve the resistance of vanilla plants to diseases.

He is presently in charge of a research program on "Vanilla genetics and certification" in Reunion Island and curator of the Vanilla collection of the Center of Biological Resources (VATEL).