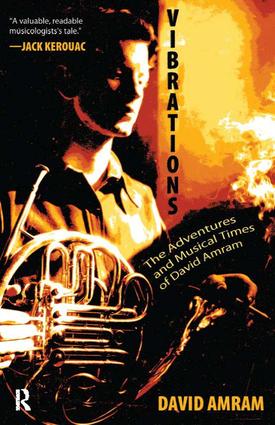 David Amram has played and rambled and galloped and staggered through a remarkably broad sweep of American life, experience, and creative struggle. The Boston Globe has described him as "the Renaissance man of American Music." Amram and Jack Kerouac collaborated on the first-ever jazz poetry reading in New York City in 1957 as well as the subsequent legendary film Pull My Daisy in 1959, combining Amram's music with Kerouac's narration. Amram, honored as the first Composer-in-Residence of the New York Philharmonic, has composed more than 100 orchestral and chamber works, written two operas, and has collaborated with Leonard Bernstein, Dizzy Gillespie, Lionel Hampton, Charles Mingus, Dustin Hoffman, Thelonious Monk, Willie Nelson, Nancy Griffith, Johnny Depp, and more. Vibrations is the story of one boy's adventures growing up on a farm in Pennsylvania, working odd jobs, misfitting in the U.S. Army, barnstorming through Europe with the famous Seventh Army Symphony, exiling in Paris, scuffling on the Lower East Side, day-laboring-often down but never out-finally emerging as a major musical force. With its stage-setting foreword by Douglas Brinkley and a new afterword by Kerouac biographer Audrey Sprenger, this new edition is not to be missed.

“Vibrations was a revelation for me. I identified totally with Amram’s joie de vivre style, which illuminates the pages of Vibrations. … One thing is certain: Amram remains the most indefatigable musician of our time.”

—From the Foreword by Douglas Brinkley

“It is a sad book and uproarious, naïve and knowledgeable, insane and finally as straight as the top of Amram’s piano. It is one man’s struggle for the kind of authenticity in life and in music which everything in our time seems designed to frustrate and destroy.”

“An utterly refreshing and rollicking ramble through the world of contemporary music, under the wing of a rambunctious tour guide who is guileless yet informative, funny yet perceptive, exhilarated yet earnest. Every profession should have its Amram!”