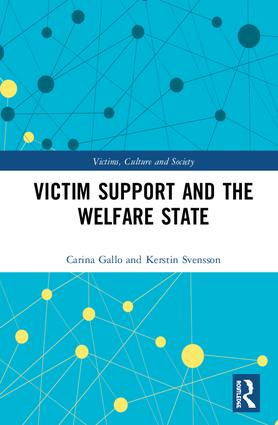 Victim Support and the Welfare State

This book provides a rich analysis of the history of Swedish victim support. With the majority of research on victim support centering on the Anglosphere, this book offers a unique case study for considering the role of the victim in the criminal justice system. While Sweden has enacted many laws to support victims, and victim assistance programs have grown rapidly, welfare policy has become more restrictive and crime policy, to some degree, more punitive.

Drawing on archival material and interviews with key representatives for the Swedish Association for Victim Support (BOJ), this book examines what role the victim movement has played in a changing welfare state. It argues that BOJ filled a function in the decentralization and privatization of the Swedish welfare state and explores distinctive features of the Swedish victim movement and the form it has taken, as compared to that in other countries.

This book will be of interest to scholars and students of criminology, sociology, social policy, civil society studies, and social work, and those engaged in studies of victims and victimology.

"It is rare to have a comparative analysis of the genesis and evolution of victim support outside a small clutch of English-speaking countries. Victim Support and the Welfare State is thus special because it looks at the birth of just such a development in Sweden, hardly a stranger to that world, but one that was quite individual, engulfed as it was in a welfare state where there was not even a term for crime victim. We have had descriptions in the past of the links between welfare and incarceration, and welfare and crime rates, but none between welfare and victim services. Gallo and Svensson’s book is therefore doubly welcome, tracing, as it does, the shaping step by step of an unusual project through a succession of remarkably distinctive financial, political and policy regimes."

Paul Rock, Emeritus Professor of Sociology at the London School of Economics

"Victim Support and the Welfare State is a most stimulating analysis of a central development in criminal policy. By choosing a non-Anglo-American country as an object of analysis, the book reveals similarities as well as differences in the expansion of the crime victim issue. The linking of victim support to the general development of politics shows its structural prerequisites. This intriguing book shows that victim support is both a cause and an effect of criminal policy, and that the emergence of the crime victim clearly has an entrepreneurial character."

2. The Golden Age of the Welfare State

3. The end of social-democratic hegemony

4. A welfare state in transformation

5. A welfare state in times of crisis

7. Marketization and Europeanization of the welfare state

8. Victim support and the state in close alliance

Dr. Carina Gallo is an Assistant Professor of Criminal Justice Studies at the School of Public Affairs and Civic Engagement at San Francisco State University. Her scholarship addresses historical and international trends in crime and welfare policies, with particular attention to how policies and laws intending to support underrepresented and marginalized groups have developed over the last century. She is especially interested in the "criminalization" of poverty and the penalization of vulnerable populations.

is a Professor of Social Work at Lund University in Sweden. Her research interests revolve around the practice, organization, professionalism, history, and role of social work in society. She is also interested in how knowledge is created and passed on; how the relationship between social worker and client is developed; how support and control interact in social work; and the role and function of the individual in the organization, whether the organization is a public authority or a voluntary organization. Kerstin has primarily studied these aspects of social work in relation to issues of crime, abuse, and youth.