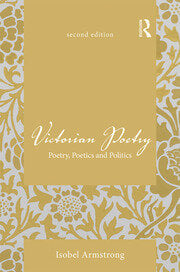 In Victorian Poetry: Poetry, Poetics and Politics, Isobel Armstrong rescued Victorian poetry from its longstanding sepia image as ‘a moralised form of romantic verse' and unearthed its often subversive critique of nineteenth-century culture and politics. In this uniquely comprehensive and theoretically astute new edition, Armstrong provides an entirely new preface that notes the key advances in the criticism of Victorian poetry since her classic work was first published in 1993. A new chapter on the alternative fin de siècle sees Armstrong discuss Michael Field, Rudyard Kipling, Alice Meynell and a selection of Hardy lyrics. The extensive bibliography acts as a key resource for students and scholars alike.

Preface to the second edition  Preface to the first edition Acknowledgements   Introduction: Re-Reading Victorian Poetry  Part 1: Conservative and Benthamite aesthetics of the avant-garde: Tennyson and Browning in the 1830s  1. Two systems of concentric circles  2. Experiments of 1830: Tennyson and the formation of subversive conservative poetry  3. 1832: Critique of the poetry of sensation  4. Experiments in the 1830s: Browning and the Benthamite formation  5. The politics of dramatic form  Part 2: Mid-century: European revolution and Crimean War – democratic, liberal, radical and feminine voices  6. Individualism under pressure  7. The radical in crisis: Clough  8. The liberal in crisis: Arnold  9. A new radical aesthetic – the Grotesque as cultural critique: Morris  10. Tennyson in the 1850s: new experiments in conservative poetry and the Type  11. Browning in the 1850s and after: new experiments in radical poetry and the Grotesque  12. ‘A music of thine own’: women’s poetry – an expressive tradition?  Part 3: Another culture? Another poetics?  Introduction: the 1860s and after: aesthetics, language, power and high finance 13. Swinburne: agonistic republican – the poetry of sensation as democratic critique  14. Hopkins: agonistic reactionary – the Grotesque as conservative form  15. Meredith and others: hard, gem-like dissidence  16. James Thomson: atheist, blasphemer and anarchist – the Grotesque sublime  17. Alternative fin de siecles: Rudyard Kipling, Michael Field, Thomas Hardy and Alice Meynell  Notes  Indicative bibliography