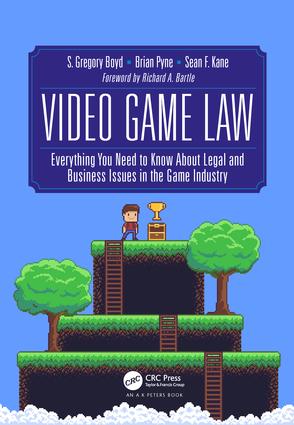 Everything you need to know about Legal and Business Issues in the Game Industry, 1st Edition

Video Game Law is aimed at game developers and industry professionals who want to better understand the industry or are in need of expert legal guidance. Given the rise in international competition, the increasing complexity of video game features, and the explosive growth of the industry in general, game developers can quickly find themselves in serious trouble, becoming vulnerable to copyright infringement claims, piracy, and even security breaches. Not every video game company has the financial resources to retain in-house counsel–which Video Game Law seeks to address by discussing many of the common pitfalls, legal questions, and scenarios facing the industry. S. Gregory Boyd, Brian Pyne, and Sean F. Kane, the most prominent, sought after, and respected video game attorneys in the country, break down the laws and legal concepts that every game developer and industry professional needs to know in order to better protect their game and grow their company.

• Provides a solid understanding of intellectual property (IP) concepts and laws, including

copyright, trademark, trade secret, and other protections that apply to video games and

and succeed in an industry that is constantly growing and evolving

S. GREGORY BOYD is one of the most prominent video game law attorneys in the United States.

of Directors. He co-chairs the Interactive Entertainment group at Frankfurt Kurnit and has been

featured in a variety of publications, including Fortune, Forbes, Mashable, and Gamasutra.

Rating Board (ESRB) and legal counsel to the International Age Rating Coalition (IARC). Prior to

joining the ESRB, Brian was Associate Counsel at Take-Two Interactive Software, the parent

company of Rockstar Games and 2K. Brian has also taught a course on intellectual property

law and the video game industry and spoken on those topics at a variety of events.

him to their 2017 Dealmakers Elite New York list and 2016 Legal Impact Report. He co-chairs

the Interactive Entertainment Group at Frankfurt Kurnit Klein & Selz, where he represents many of

the most well-known names in the video game industry. Sean is also on the Board of the Video Game

Bar Association and is a sought after author, speaker and industry commentator.