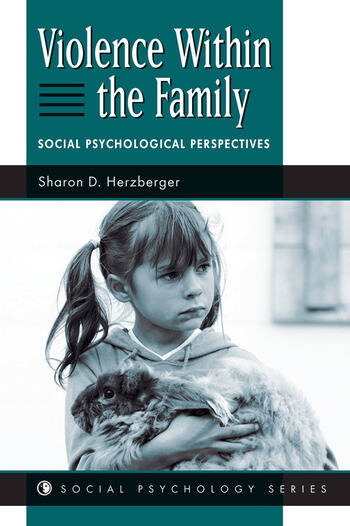 Perhaps one-fifth of all marriages are tainted by violence, and an equal number of children are harmed by parents. Abuse of elderly relatives is just beginning to be recognized as a major social problem, but the most common form of family violence occurs between siblings. Violence Within the Family connects the study of child, partner, sibling, and elderly abuse to the varied disciplinary perspectives of social psychology, drawing on research on aggression, attitude formation and change, self-perception, social cognition, gender roles, and group dynamics. The book covers the biological and social causes of aggression, the consequences of violence towards an intimate family member, and prevention and treatment strategies.Sharon Herzberger also addresses important policy issues and explores today's hard questions: Does a child who is abused grow up to become an abuser? Can anyone, given the right circumstances, inflict violence on a family member? Why do victims of partner abuse remain with the perpetrator? Should we arrest perpetrators of family violence, and under what conditions does arrest do more harm than good? Why can't we prosecute family violence more effectively?Answering widespread interest in this compelling topic, Herzberger's book will appeal to laypeople and professionals in criminal justice, family systems, public policy, psychology, and sociology. It will also serve as a valuable text for advanced courses or as a supplementary text for introductory courses.

Preface, The Incidence of Family Violence, What Do We Mean by "Family Violence"? , Rates of Family Violence, The Validity of Information about Violence, Child Abuse, Spouse Abuse, Sibling Violence, Elderly Abuse, Multiple Forms of Violence in the Family, Violence in the Home versus outside the Home, Universality of Violence against Family Members, Cross-Cultural Variations, Temporal Variations, Concluding Remarks, Attitudes about Violence in Families, Evidence of Tolerance for Aggression against Family Members, Explanations for Tolerance of Aggression, Lack of Empathy for Victims, Belief in a Just World, Illusions about Ability to Prevent Violence, Tolerance of Victimization of Family Members, Variation in Levels of Tolerance of Violence, Variation Due to Context, Variation Due to Gender Roles, Variation Due to Education and Socioeconomic Status, Variation Due to Ethnic, Racial, or Other Cultural Differences Variation Due to Professional Orientation, Variation Due to Characteristics of the Victim and Perpetrator, The Relationship between Attitudes and Behavior, Concluding Remarks, Victims' Reactions to Violence, Victims' Beliefs about Themselves and Their Victimization, Causal Thinking, Learned Helplessness, Problem-Solving Abilities, Perceptions That Their Treatment Is Unusual, Are Victims Masochistic?, Decreased Sensitivity to Aggression, Why Do Abuse Victims Stay?, Fear and Dependence upon the Abuser, Lack of Support from Police and Social Services, Affection for the Perpetrator, Other Victim Reactions, Help-Seeking, Retaliation, Perpetrator Desistance: Which Strategies Work?, Concluding Remark, The Dynamics of Family Life, The Social System of the Family, Parent-Child Relations, Parent Factors, Child Factors, The Interaction between Parent Factors and Child Factors, Relationship to Other Family Subsystems, Spousal or Partner Relations, Perpetrator Characteristics, Victim Characteristics, Couple Characteristics, Inequality, Relationship to Other Family Subsystems, The Prevention and Treatment of Family, Violence, Prevention, Education and Support to Potential Perpetrators, Education and Empowerment of Potential Victim, Changes in the Law, Changes in the Media Portrayal of Violence, Multifaceted Prevention Efforts, Treatment Programs, Determinants of Behavior Change, Therapeutic Interventions with Offenders, Self-Help Groups, Intervention with Victims of Partner Abuse, Intervention with Victims of Child Abuse, Intervention with Victims of Elderly Abuse, Intervention in Cases of Sibling Violence, Individual Reactions to Intervention, Concluding Remarks, References, Index

Sharon D. Herzberger is professor of psychology at Trinity College.