Violence and Community
Law, Space and Identity in the Ancient Eastern Mediterranean World 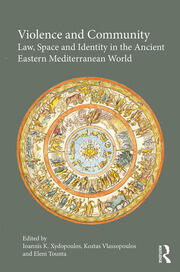 Violence and Community: Law, Space and Identity in the Ancient Eastern Mediterranean World

Violence and community were intimately linked in the ancient world. While various aspects of violence have been long studied on their own (warfare, revolution, murder, theft, piracy), there has been little effort so far to study violence as a unified field and explore its role in community formation. This volume aims to construct such an agenda by exploring the historiography of the study of violence in antiquity, and highlighting a number of important paradoxes of ancient violence. It explores the forceful nexus between wealth, power and the passions by focusing on three major aspects that link violence and community: the attempts of communities to regulate and canalise violence through law, the constitutive role of violence in communal identities, and the ways in which communities dealt with violence in regards to private and public space, landscapes and territories. The contributions to this volume range widely in both time and space: temporally, they cover the full span from the archaic to the Roman imperial period, while spatially they extend from Athens and Sparta through Crete, Arcadia and Macedonia to Egypt and Israel.

1. Introduction: the study of violence and community in ancient Greek history / 2. Making law grip: inequality, injustice and legal remedy in Solonian Attica and ancient Israel / 3. How to cast a criminal out of Athens: law and territory in archaic Attica / 4. Macedonians in Bottiaea: ‘warriors’ and identities in Late Iron Age and archaic Macedonia / 5. Socialisation, identity and violence in classical Greek cities / 6. Binding curses, agency and the Athenian democracy / 7. Reintegrating the exiles: violence, urban landscape and memory in early Hellenistic Tegea / 8. Violating the security of the oikia: thefts from houses in the Hellenistic and Roman Imperial periods

Ioannis K. Xydopoulos is an Assistant Professor of Ancient Greek History at the Aristotle University of Thessaloniki. His publications include Social and Economic Relations between Macedonians and the Other Greeks (2006) and The Perception of Ancient Thracians in Classical Historiography (2007).

Eleni Tounta is Assistant Professor of Medieval History at the Aristotle University of Thessaloniki. Her publications include The Western sacrum imperium and the Byzantine Empire (2008), Usurping Ritual (with Dr. Gerald Schwedler, 2010) and Medieval Mirrors of Power: Historians and Narratives in the Norman South of Italy (2012).