Vivir Bien as an Alternative to Neoliberal Globalization
Can Indigenous Terminologies Decolonize the State? 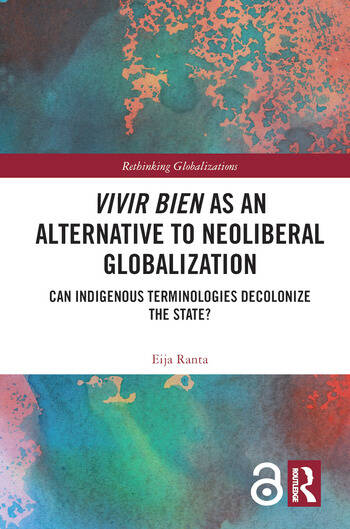 Vivir Bien as an Alternative to Neoliberal Globalization: Can Indigenous Terminologies Decolonize the State?

Presenting an ethnographic account of the emergence and application of critical political alternatives in the Global South, this book analyses the opportunities and challenges of decolonizing and transforming a modern, hierarchical and globally-immersed nation-state on the basis of indigenous terminologies.

Alternative development paradigms that represent values including justice, pluralism, democracy and a sustainable relationship to nature tend to emerge in response to – and often opposed to – the neoliberal globalization. Through a focus on the empirical case of the notion of Vivir Bien (‘Living Well’) as a critical cultural and ecological paradigm, Ranta demonstrates how indigeneity – indigenous peoples’ discourses, cultural ideas and worldviews – has become such a denominator in the construction of local political and policy alternatives. More widely, the author seeks to map conditions for, and the challenges of, radical political projects that aim to counteract neoliberal globalization and Western hegemony in defining development.

This book will appeal to critical academic scholars, development practitioners and social activists aiming to come to grips with the complexity of processes of progressive social change in our contemporary global world.

1. Introduction: Vivir Bien as a post-neoliberal alternative in the global world

3. Indigenous resistance struggles, coloniality of the state and the capitalist world-system: A historical view

Indigenous elements in the constitution

6. Bureaucracy as a disciplinary power

7. In the name of Vivir Bien: Legitimizing extractive conflicts?

The state and neoliberalism

Eija Ranta is university lecturer in development studies at the University of Helsinki.

"In this historical moment of crisis and disillusionment, this book offers us an introduction to a novel and powerful concept. Ranta writes with precision and passion, rooted in the Andes but contributing to cosmopolitan discussions." - Eduardo Gudynas, Director, Latin American Center of Social Ecology (CLAES), Uruguay.

"Can indigenous ideas not just challenge but transform the postcolonial nation state? Ranta’s book interrogates our understanding of indigeneity and of the modern, globalised nation state as well. It demonstrates how indigeneity is not simply a discourse of marginality but how it challenges the very notion of how citizens – of all backgrounds – relate to the state. Based on a deeply rich ethnography of bureaucracy, Ranta’s book explores what happens when indigeneity enters into the heart of the nation state." - Andrew Canessa, University of Essex, UK.