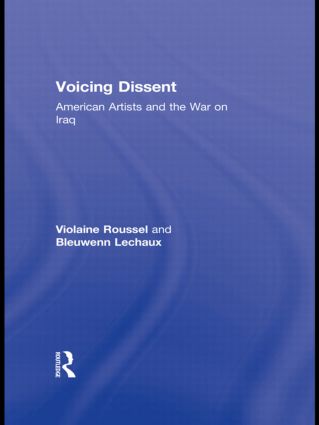 American Artists and the War on Iraq, 1st Edition

Voicing Dissent presents a unique and original series of interviews with American artists (including Guerrilla Girls on Tour, Tony Shalhoub, Shepard Fairey, Sean Astin, and many others) who have voiced their opposition to the war in Iraq. Following Pierre Bourdieu's example, these discussions are approached sociologically and provide a thorough analysis of the relationships between arts and politics as well as the limits and conditions of political speech and action. These painters and graphic artists, musicians, actors, playwrights, theatre directors and filmmakers reveal their perceptions of politics, war, security and terrorism issues, the Middle East, their experiences with activism, as well as their definition of the artist's role and their practice of citizenship. Addressing the crucial questions for contemporary democracies - such as artists' function in society, the crisis of political legitimacy and representation, the rise of new modes of contestation, and the limits to free public speech - this book will be of interest to scholars in sociology, politics, and the arts.

"Shows why and how artists become activists, without sacrificing their art. These are fascinating stories."

Lechaux and Roussel “present iconic figures who reveal to us a broad register of ways of engaging, a repertoire of argument that we could not anticipate beforehand. Thus the reader emerges with a much deeper understanding of the nexus between politics, culture, and human subjectivity. And also, of course, of the topic at hand – how artists tried to make a difference in a very specific episode of contemporary American history. The experience will be enriching and imminently worthwhile. This is why I invite you to spend a few hours with this book. You will not be disappointed.”

Violaine Roussel is a sociologist and professor of Political Science at the University of Paris VIII and currently a visiting scholar in the Department of Sociology at UCLA. Bleuwenn Lechaux is currently completing a PhD in political science at the University of Rennes on a comparative analysis of the involvement of theatre artists for social and political causes in Paris and New York since the 1970s.

Routledge Studies in Law, Society and Popular Culture is an inter-disciplinary series that examines the relationship between the law and all areas of popular culture. Particular foci include the regulation of spheres of popular culture and representations of law within popular culture. ‘Popular Culture’ is a broad and inclusive church that includes all aspects of leisure and culture, including but not confined to music, sport, film, media, night- time economy, art, literature, the internet etc. Whilst law may well provide a useful vehicle for an analysis of cultural activities within society the absence of law in the field may be just as important and worthy of consideration.