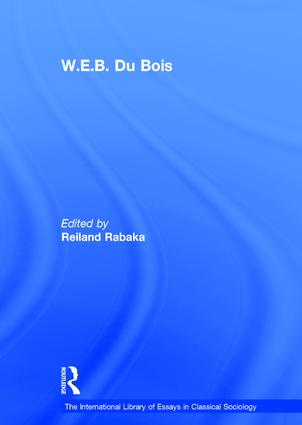 Housed in one handy volume for the first time are several of the seminal essays on W.E.B. Du Bois's contributions to sociology and critical social theory: from Du Bois as inventor of sociology of race, to Du Bois as the first sociologist of American religion; from Du Bois as a pioneer of urban and rural sociology, to Du Bois as innovator of sociology of gender and culture; and, finally, from Du Bois as groundbreaking sociologist of education and critical criminologist, to Du Bois as dialectical critic of the disciplinary decadence of sociology and the American academy. What this volume offers that is wholly innovative and distinctive is that it brings together the watershed work of classical and contemporary, male and female, black and white, national and international sociologists and social theorists with the express intent of creating critical inventories and thoroughly interrogating what has been included, and what has been excluded, when we come to W.E.B. Du Bois's contributions to the discipline of sociology. Unlike any other anthologies on Du Bois, this volume offers an excellent overview of the critical commentary on arguably one of the most imaginative and innovative, perceptive and prolific founders of the discipline of sociology. It will therefore be of interest to scholars and students not just in sociology, but also Africana studies, American studies, cultural studies, ethnic studies, gender studies and postcolonial studies, as well as "traditional" disciplines, such as, history, philosophy, political science, economics, education, and religion.

Reiland Rabaka is an Associate Professor of Africana Studies in the Department of Ethnic Studies at the University of Colorado at Boulder, where he is also an Affiliate Professor in the Department of Women and Gender Studies and a Research Fellow at the Center for Studies of Ethnicity and Race in America (CSERA). He is the author of W.E.B. Du Bois and the Problems of the Twenty-First Century (2007), Du Bois's Dialectics: Black Radical Politics and the Reconstruction of Critical Social Theory (2008), Africana Critical Theory: Reconstructing the Black Radical Tradition, from W.E.B. Du Bois and C.L.R. James to Frantz Fanon and Amilcar Cabral (2009), Forms of Fanonism: Frantz Fanon's Critical Theory and the Dialectics of Decolonization (2010), and W.E.B. Du Bois and the Disciplinary Decadence of Sociology: An Essay on Intellectual Amnesia and Epistemic Apartheid (forthcoming).