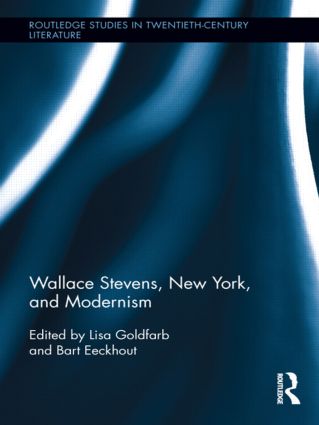 This unique essay collection considers the impact of New York on the life and works of Wallace Stevens. Stevens lived in New York from 1900 to 1916, working briefly as a journalist, going to law school, laboriously starting up a career as a lawyer, getting engaged and married, gradually mixing with local avant-garde circles, and eventually emerging as one of the most exciting and surprising voices in modern poetry. Although he then left the city for a job in Hartford, Stevens never saw himself as a Hartford poet and kept gravitating toward New York for nearly all things that mattered to him privately and poetically: visits to galleries and museums, theatrical and musical performances, intellectual and artistic gatherings, shopping sprees and gastronomical indulgences.

Recent criticism of the poet has sought to understand how Stevens interacted with the literary, artistic, and cultural forces of his time to forge his inimitable aesthetic, with its peculiar mix of post-romantic responses to nature and a metropolitan cosmopolitanism. This volume deepens our understanding of the multiple ways in which New York and its various aesthetic attractions figured in Stevens’ life, both at a biographical and poetic level.

Bart Eeckhout is Associate Professor of English and American Literature at the University of Antwerp, Belgium and Editor Elect of The Wallace Stevens Journal.