Walter Lippmann and the American Century 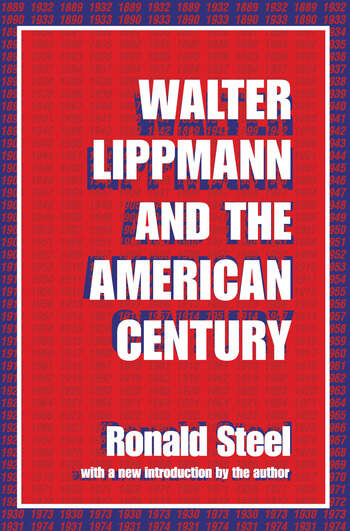 Walter Lippmann and the American Century

Walter Lippmann began his career as a brilliant young man at Harvard—studying under George Santayana, taking tea with William James, a radical outsider arguing socialism with anyone who would listen—and he ended it in his eighties, writing passionately about the agony of rioting in the streets, war in Asia, and the collapse of a presidency. In between he lived through two world wars, and a depression that shook the foundations of American capitalism.

Walter Lippmann (1889-1974) has been hailed as the greatest journalist of his age. For more than sixty years he exerted unprecedented influence on American public opinion through his writing, especially his famous newspaper column "Today and Tomorrow." Beginning with The New Republic in the halcyon days prior to Woodrow Wilson and the First World War, millions of Americans gradually came to rely on Lippmann to comprehend the vital issues of the day.

In this absorbing biography, Ronald Steel meticulously documents the philosophers and politics, the friendships and quarrels, the trials and triumphs of this man who for six decades stood at the center of American political life. Lippmann's experience spanned a period when the American empire was born, matured, and began to wane, a time some have called "the American Century." No one better captured its possibilities and wrote about them so wisely and so well, no one was more the mind, the voice, and the conscience of that era than Walter Lippmann: journalist, moralist, public philosopher.