War, Power and the Economy
Mercantilism and state formation in 18th-century Europe 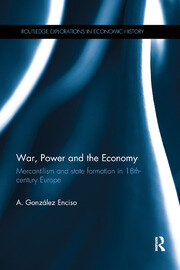 War, Power and the Economy: Mercantilism and state formation in 18th-century Europe

War, Power and the Economy contains a comparative history of Great Britain, France and Spain, the three rival empires of the 1700s. It explores how the states prepared for war, what kind of economic means they had, what institutional changes they implemented, and how efficient this was. As such, the book presents the first comparative synthesis aiming to understand the outcome of the global confrontation in the eighteenth century.

Faced with the challenge of paying for new and more costly wars, some countries found flexible ways to get more money and better supplies, whereas others did not. The development of freer colonial markets, the increase of consumption and its taxation, the problems of venal administration or the different systems of patronage with contractors, are some of the factors explaining the divergences that were made clear by 1815. This book explores political and economic dimensions of the eighteenth-century European state in order to explain why and how changes in power as an outcome of war depended upon the available means and the way they were obtained and used. The book takes the idea that making war or preparing for it obliged governments to make important changes in their institutions, so that during the eighteenth century the state in many ways formed itself through war efforts. Ultimately, this study aims to show how closely political and military success was entwined with economic interests.

This volume is of great interest to those who study economic history, political economy and European history.

Spain and its eighteenth-century rivals

War and the early modern state

1 Changing strategies and global power in the long eighteenth century

1.1 The long consequences of Utrecht

2.4 Fiscal-military states: the development of a methodological concept

3.1 The increase in the tax trawl

3.3 Divergent paths: the trend of the fiscal structure in the long eighteenth century

3.4 Tobacco and metals, the pearls of the Empire

3.5 Possibilities and flexibility of fiscal policies

3.6 Changes in the fiscal structure as from the eighties and the breakdown of some systems

4.1 Direct administration vs. tax farming. Why were taxes farmed out?

4.3 The impossible reform of the French system

4.5 Administering to implement a new system

4.6 A political agenda against tax farmers?

A. González Enciso is Professor of Early Modern History at the Universidad de Navarra, Spain. His research interests have been focused on the economic history of eighteenth-century Spain, namely industrial and financial history, and he is a member of the international Contractor State Group.