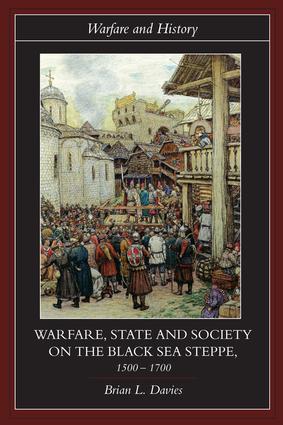 This crucial period in Russia's history has, up until now, been neglected by historians, but here Brian L. Davies' study provides an essential insight into the emergence of Russia as a great power.

For nearly three centuries, Russia vied with the Crimean Khanate, the Polish-Lithuanian Commonwealth and the Ottoman Empire for mastery of the Ukraine and the fertile steppes above the Black Sea, a region of great strategic and economic importance – arguably the pivot of Eurasia at the time.

The long campaign took a great toll upon Russia's population, economy and institutions, and repeatedly frustrated or redefined Russian military and diplomatic projects in the West.

The struggle was every bit as important as Russia's wars in northern and central Europe for driving the Russian state-building process, forcing military reform and shaping Russia's visions of Empire.

'Davies has written a complex history of a complex and significant borderland.' – The Russian Review

1. Colonization, War, and Slaveraiding on the Black Sea Steppe in the Sixteenth Century 2. Muscovy’s Southern Borderland Defense Strategy, 1500–1635 3. The Belgorod Line 4. The Ukrainian Quagmire 5. The Chyhyryn Campaigns and the Wars of the Holy League 6. The Balance of Power at Century’s End

Brian L. Davies is Associate Professor of History at the University of Texas at San Antonio. His publications include State Power and Community in Early Modern Russia: The Case of Kozlov, 1635-1649 (2004).

This new series of single-authored books on war, warfare and society marks a major new publishing initiative in military history for undergraduate students. Covering the whole span of history, the series seeks to encourage works on the impact of war and the preparations for war on social, economic and political developments. The books will eschew the 'battles and generals' approach, and seek to place militarism in context.