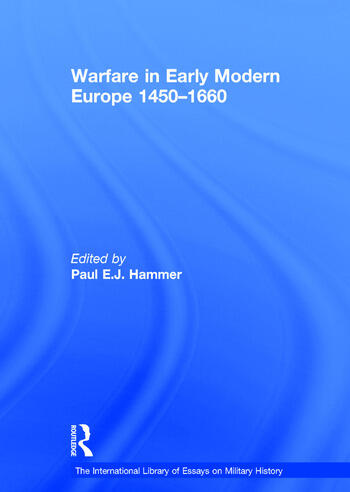 The early modern period saw gunpowder weapons reach maturity and become a central feature of European warfare, on land and at sea. This exciting collection of essays brings together a distinguished and varied selection of modern scholarship on the transformation of war”often described as a ’military revolution’”during the period between 1450 and 1660.

Contents: Series preface; Introduction; The 'military revolution', 1560-1660 - a myth?, Geoffrey Parker; The military revolutions of the Hundred Years War, Clifford J. Rogers; 'Of nimble service': technology, equestrianism and the cavalry arm of early modern European armies, Gervase Phillips; The cannon conquest of Nasrid Spain and the end of the Reconquista, Weston F. Cook Jr; Sword and spade: military construction in renaissance Italy, Simon Pepper; The utility of fortifications in early modern Europe: Italian princes and their citadels, David Parrott; The international mercenary market in the 16th century: Anglo-French competition in Germany, David Potter; 'Doctors of the military discipline': technical expertise and the paradigm of the Spanish soldier in the early modern period, Fernando GonzÃ¡lez de Leon; Mutiny and discontent in the Spanish army of Flanders 1572-1607, Geoffrey Parker; Middle-class society and the rise of military professionalism: the Dutch army, 1589-1609, M.D. Feld; The militarization of the Elizabethan state, John S. Nolan; Ottoman artillery and European military technology in the 15th and 17th centuries, GÃ¡bor Ãgoston; Early-modern colonial warfare and the campaign of Alcazarquivir, 1578, David Trim; The Dreadnought revolution of Tudor England, Geoffrey Parker; So why were the Aztecs conquered, and what were the wider implications? Testing military superiority as a cause of Europe's pre-industrial colonial conquests, George Raudzens; Strategy and tactics in the Thirty Years' War: the 'military revolution', David A. Parrott; The socio-economic relations of warfare and the military mortality crises of the Thirty Years' War, Quentin Outram; IName index.

Paul E.J. Hammer has published extensively on Elizabethan politics and political culture, as well as on Tudor England and the waging of war. He is currently a Senior Lecturer in History at the University of St Andrews.