Warring with Words
Narrative and Metaphor in Politics 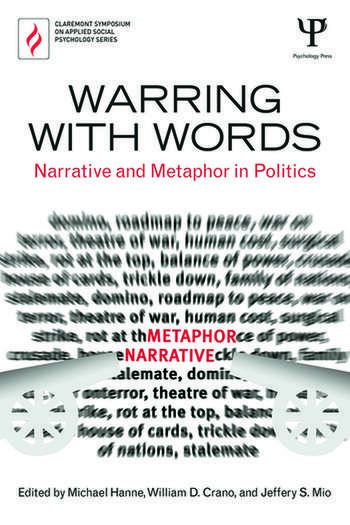 Warring with Words: Narrative and Metaphor in Politics

Scholars in many of the disciplines surrounding politics explicitly utilize either a narrative perspective or a metaphor perspective (though rarely the two in combination) to analyze issues -- theoretical and practical, domestic and international -- in the broad field of politics. Among the topics they have studied are:

This volume is the first in which eminent scholars from disciplines as diverse as social psychology, anthropology, political theory, international relations, feminist political science, and media studies, have sought to integrate the narrative and the metaphor perspectives on politics.

It will appeal to any scholar interested in the many ways in which narrative and metaphor function in combination as cognitive and rhetorical instruments in discourse around politics.

Michael Hanne founded the Comparative Literature Program at the University of Auckland in 1995 and directed it until 2010. His recent research has focused on the role of narrative and metaphor in the construction of a wide range of disciplines from medicine to politics, to education and the law. He has written articles advocating closer cooperation between narrative scholars and metaphor scholars in the various disciplines.

William D. Crano is Oskamp Professor and Chair of the Psychology Department at Claremont Graduate University. He has published widely on research on communication and persuasion, especially the influence of minorities on the majority. His field research is directed toward applications of persuasive principles in the prevention of adolescent drug misuse.

Jeffery Scott Mio is the director of the M.S. in Psychology Program at California State Polytechnic University, Pomona. He received his Ph.D. in Clinical Psychology from the University of Illinois, Chicago, in 1984. His main lines of research are in how metaphors are used in political persuasion and in the teaching of multicultural psychology, having authored or edited numerous articles and books in both areas.

"The dynamics of communication and persuasion are overwhelmingly carried by what is said, how arguments are framed, and how factual information is 'spun.' In this timely volume the authors, all leading experts in their respective fields, examine this all important topic of human interaction. A must read for all those with an interest in the processes of social influence and in the secrets of effectively 'saying things with words." - Arie W. Kruglanski, Ph.D., University of Maryland, USA

"This groundbreaking book not only illuminates the discourse of politics but also contributes importantly to research on the cognitive and rhetorical functions of metaphor and narrative more generally." -David Herman, Ph.D., Durham University, UK

"Warring With Words gives a fascinating overview over recent research on metaphor and narrative in political rhetoric and thought. By illustrating the impact of these two levels of rhetoric on current international political discourse as well as on theories of statehood, sovereignty, international relations and conflict, the book shows that conceptualisation of and communication about political issues is impossible without metaphor and narrative. By exploring their epistemological, historical and cognitive dimensions, the volume provides an indispensable platform for further research and academic teaching on Language and Politics." -Andreas Musolff, Ph.D., University of East Anglia, UK