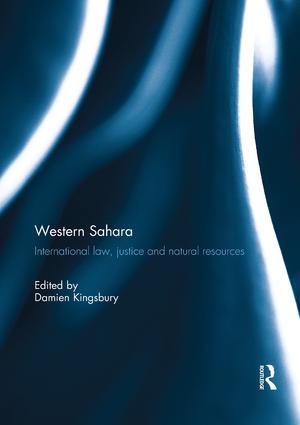 As the Spanish were preparing to leave colonized Western Sahara in 1975, Morocco invaded, sparking a war with the Western Saharan Polisario Front. About 70% of Western Sahara was occupied by Morocco, which stations up to 140,000 soldiers in the territory, primarily along a 1700 kilometre long sand berm that is protected by one of the world’s largest fields of landmines. In 1991, Morocco and the Polisario Front agreed to a truce ahead of a referendum on Western Sahara’s future. However, Morocco has since refused to allow the referendum to take place, and has begun the extensive exploitation of Western Sahara’s non-renewable natural resources. This has both highlighted the plight of the Saharawi people who live in refugee camps in Algeria and in occupied Western Sahara, and pushed the Polisario Front back to a position where it is openly canvassing for a return to war. This book was originally published as a special issue of Global Change, Peace and Security.

Introduction: Resources and a Return to Conflict? Damien Kingsbury

1. The Status of Western Sahara as Occupied Territory under International Humanitarian Law and the Exploitation of Natural Resources Ben Saul

3. The taking of the Sahara: The role of natural resources in the continuing occupation of Western Sahara Jeffrey Smith

7. Out of the impasse: The self-determinations of Timor-Leste and Western Sahara Pedro Pinto Leite

Damien Kingsbury holds a Personal Chair and is Professor of International Politics in the School of Humanities and Social Sciences at Deakin University, Melbourne, Australia. His research interests include assertions of self-determination, the role of the military in politics, post-colonial political structures, and nation formation. He is the author of Sri Lanka and the responsibility to protect: politics, ethnicity and genocide (2012), and East Timor: the price of liberty (2009).