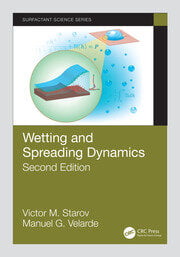 Wetting and Spreading Dynamics explains how surface forces acting at the three-phase contact line determine equilibrium, hysteresis contact angles, and other equilibrium and kinetics features of liquids when in contact with solids or with other immiscible liquids. It examines the interaction of surface forces, capillary forces, and properties of the transition zone between the bulk liquid and solid substrate.

Drawing together theory and experimental data while presenting over 150 figures to illustrate the concepts, Wetting and Spreading Dynamics, Second Edition is a valuable resource written for both newcomers and experienced researchers.

1. Surface Forces and Equilibrium of Liquids on Solid Substrates

6. Wetting of Wetting/Spreading in the Presence of Surfactants

7. Kinetics of Simultaneous Spreading and Evaporation

8. Main Problems in Kinetics of Wetting and Spreading to Be Solved

Victor Starov, PhD, DSc, Fellow of the Royal Society of Chemistry, Professor. Victor Starov has been a Professor at the Department of Chemical Engineering, Loughborough University, UK, since 1999. He received his PhD from the USSR Academy of Sciences in 1970 on "Capillary hysteresis in porous bodies." He received his DSc degree from St. Petersburg University in 1981 on "Equilibrium and kinetics of thin liquid layers in dispersed systems." Victor Starov is working on the influence of surface forces on kinetics of wetting and spreading over rigid and soft solids and the kinetics of spreading over porous and hydrophobic surfaces. He has published more than 300 scientific papers. Some of his research results are summarized in this book. He currently serves on the editorial board of 10 journals. He has participated in numerous organizing and scientific committees of international conferences and was a chairman of ECIC XVII in 2005. For more information, please visit https://doi.org/10.1016/j.cis.2007.04.016 (Manuel G. Velarde. "Honorary Note," Advances in Colloid and Interface Science, 134–135 (2007), 1–2; and https://doi.org/10.1016/j.colsurfa.2016.11.028Get (N. M. Kovalchuk, R. Miller, Manuel G. Velarde. "Honorary Note," Colloids and Surfaces A: Physicochemical and Engineering Aspects, 521 (2017), 1–2.

, PhD Physics (UCM, Spain, 1968; ULB, Belgium, 1970), Honorary Doctor (Aix-Marseille, Saratov), is an Emeritus Professor at the Instituto Pluridisciplinar, Universidad Complutense Madrid (Spain). He is a member of Academia Europaea and the European Academy of Sciences. He has published numerous papers and book chapters, and six research frontier monographs and has edited several other books dealing with interfacial phenomena, wetting and spreading processes, waves and convective instabilities, and nonlinear dynamics as applied to various fields of science (patterns, waves, solitons, and chaos). He has over two decades of collaboration with V. M. Starov on wetting and spreading processes. At present he is mostly engaged in a theory of soliton-assisted electron transport (mechanical control of electrons at the nanolevel). He is the co inventor (with E. G. Wilson) of a novel field effect transistor, not using silicon, designed to operate with extremely low dissipation and huge mobility (UK Patent application published GB 2533105 A-15/6/2016). For further details see http://www.ucm.es/info/fluidos; see also R. G. Rubio et al., Without Bounds: A Scientific Canvas of Nonlinearity and Complex Dynamics, Springer, Berlin (2013) and R. Miller, R. G. Rubio and V. M. Starov, Advances in Colloid and Interface Science 206 (2014).