What Animals Mean in the Fiction of Modernity 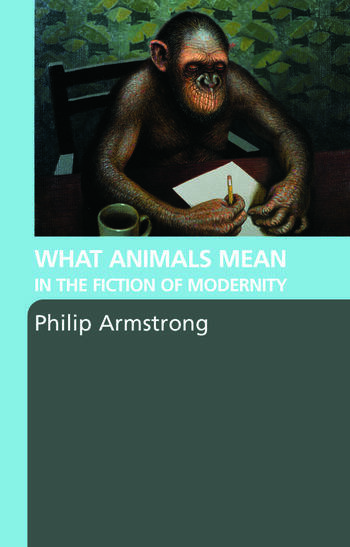 What Animals Mean in the Fiction of Modernity

What Animals Mean in the Fiction of Modernity argues that nonhuman animals, and stories about them, have always been closely bound up with the conceptual and material work of modernity.

In the first half of the book, Philip Armstrong examines the function of animals and animal representations in four classic narratives: Robinson Crusoe, Gulliver’s Travels, Frankenstein and Moby-Dick. He then goes on to explore how these stories have been re-worked, in ways that reflect shifting social and environmental forces, by later novelists, including H.G. Wells, Upton Sinclair, D.H. Lawrence, Ernest Hemingway, Franz Kafka, Brigid Brophy, Bernard Malamud, Timothy Findley, Will Self, Margaret Atwood, Yann Martel and J.M. Coetzee.

What Animals Mean in the Fiction of Modernity also introduces readers to new developments in the study of human-animal relations. It does so by attending both to the significance of animals to humans, and to animals’ own purposes or designs; to what animals mean to us, and to what they mean to do, and how they mean to live.

Introduction.  1. The Inhuman Fictions of Swift and Defoe  2. Gulliver, Frankenstein, Moreau  3. Rendering the Whale  4. Modernism and the Hunt for Redemption  5. Animal Refugees in the Ruins of Modernity

Philip Armstrong teaches at the University of Canterbury, Aotearoa, where he is Co-Director of the New Zealand Centre for Human-Animal Studies.

"Remarkable depth and breadth in its engagement with critical discussions of animals in modern fiction".

"An essential book for anyone involved in Animal Studies and everyone concerned with animals in literature".

"A magisterial reading of Moby-Dick appears in What Animals Mean in the Fiction of Modernity alongside compelling studies of Gulliver's Travels, Robinson Crusoe, Frankenstein, a host of twentieth-century novels, and critical analyses of Wells and Lawrence ...".