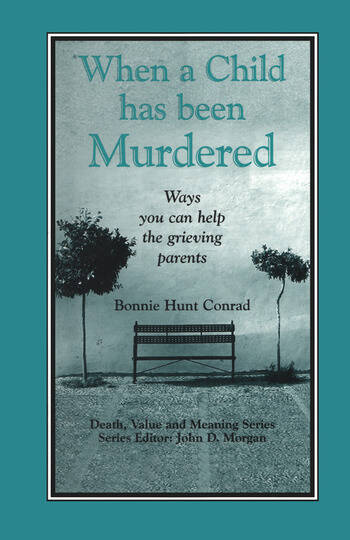 When a Child Has Been Murdered: Ways You Can Help the Grieving Parents

"When a Child Has Been Murdered: Ways You Can Help the Grieving Parents" is a concise, easy- to-read guide that begins with a general discussion of the types of grief that result from death and non-death losses. Then, using statements made by parents whose children were murdered, it discusses the specifics of murdered-child grief including: the complex emotions felt by the grieving parents, how the necessity of interacting with the criminal justice system can alter and enhance these emotions, short- and long-term methods these parents employ to work through the grieving process and to reconstruct their shattered lives, and how anyone who comes in contact with the parents can help them survive their grief.

Chapter One
Contained in this two-part chapter are descriptions of the nine core emotions of grief and an explanation as to why these emotions are present, in combinations of two or more, in all death and non-death losses.

Chapter Two
Presented are examples of internal and external factors that can affect the depth, manifestation and duration of all types of grief.

Chapter Three
In addition to experiencing the nine core emotions of grief, parents of murdered children experience a myriad of other emotions. These emotions, which are typical to murdered-child grief, are described.

Chapter Four
After a child has been murdered the parents are required to interact with those who make up the criminal justice system. Presented are explanations of how this interaction can ease or worsen the parents' grief.

Chapter Five
When their child is murdered the parents' lives permanently change in ways both negative and positive. These changes, and how the parents assimilate them into their lives, are explained.

Chapter Six
Parents of murdered children need help to survive their grief from the minute their child dies. Anyone who encounters the parents can help them survive using the techniques presented.

Chapter Seven
Reconstructing their shattered lives is a struggle in which parents of murdered children engage for many years. Using the long-term methods of help described, those who come in contact with the parents can aid in that struggle.