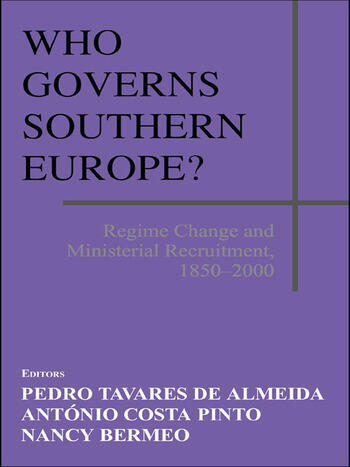 In modern politics, cabinet ministers are major actors in the arena of power as they occupy a strategic locus of command from which vital, authoritative decisions flow continuously. Who are these uppermost policy-makers? What are their background characteristics and credentials? How are they selected and which career paths do they travel in their ascent to power?
This set of research issues has guided this collection, a comprehensive, empirical account of the composition and patterns of recruitment of ministerial elites in Southern Europe throughout the last 150 years, thus encompassing different historical circumstances and political settings - liberal, authoritarian and democratic. With original, comparative data from the 19th century to the present, it provides valuable material for debates about how regime change and economic development affect who governs.

'A gap has at last been filled in our knowledge of West European Governments. Who Governs Southern Europe? is a fascinating analysis of the way the cabinets of the countries of Southern Europe have gradually ceased to be ‘exceptions’ and become ‘normal’ within the Western European family. Must be read by all those interested in the evolution of governments.'

'This is a theoretically acute, empirically exhaustive study of top-level political elites in the four countries of Southern Europe over the past 150 years. Combining deep historical knowledge with extensive data, the book is a fundamental contribution to our knowledge of elite circulation and political regime change during the modern historical period.'

'This book fills an important gap in our knowledge of political elites. Its unique focus on cabinet ministers in four contemporary societies of Southern Europe yelds a rich trove of empirical data that offer much food for thought. It raises significant substantive questions and prompts us to ponder their impact for a world forging new forms of political alliances and institutions across national boundaries'

'The conclusions reached by this book (…) mark an important step forward in our efforts to understand the political development of Southern Europe.'

'There can be little doubt this work will prove be a starting point for future research – whether by the scale of the work undertaken (both in the revision of specialist literature and in the production of empirical data) or via the debate the theses and hypotheses presented in these pages may stimulate.'