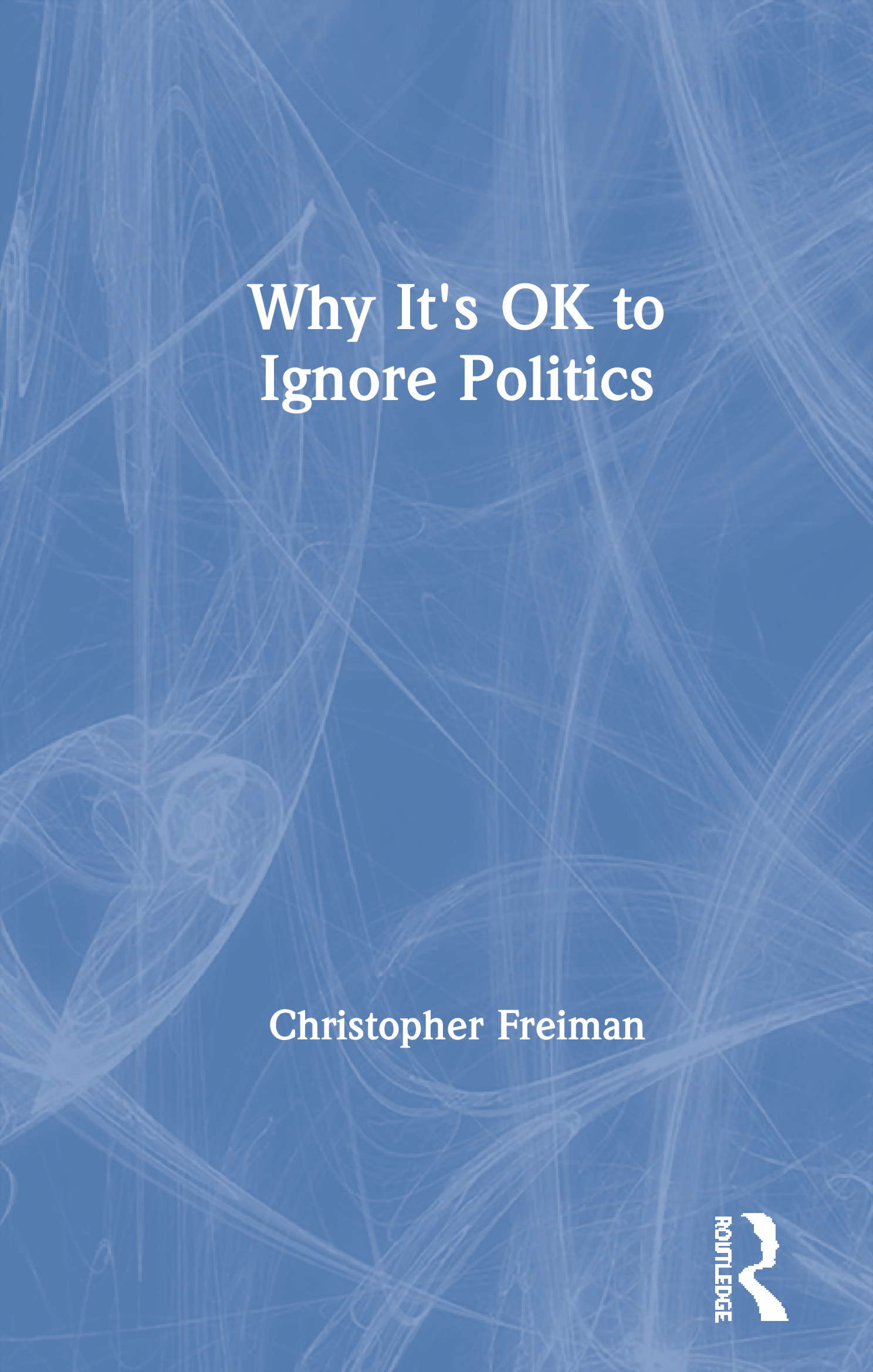 Do you feel like you’re the only person at your office without an "I Voted!" sticker on Election Day? It turns out that you're far from alone – 100 million eligible U.S. voters never went to the polls in 2016. That’s about 35 million more than voted for the winning presidential candidate.

In this book, Christopher Freiman explains why these 100 million need not feel guilty. Why It’s OK to Ignore Politics argues that you’re under no obligation to be politically active. Freiman addresses new objections to political abstention as well as some old chestnuts ("But what if everyone stopped voting?"). He also synthesizes recent empirical work showing how our political motivations distort our choices and reasoning. Because participating in politics is not an effective way to do good, Freiman argues that we actually have a moral duty to disengage from politics and instead take direct action to make the world a better place.

"Why It’s OK to Ignore Politics isn’t just a wise, witty work of philosophy. It is a fantastic self-help book. And the more the title shocks you, the more you need to read it."

"This is a terrific book addressing something of interest to a lot of people. It's clear, fast-paced, compellingly-argued, and delightfully contrarian. By the end, Freiman actually makes a strong case that being politically active is not just unnecessary, but morally wrong."

1. In Pursuit of Political Wisdom

3. The Costs and Benefits of Political Participation

5. Political Abstention and Complicity in Injustice

6. The Morality of the Message

Christopher Freiman is Associate Professor of Philosophy at William & Mary. He is the author of Unequivocal Justice (2017).

The Ethics and Aesthetics of How We Live

Philosophers often build cogent arguments for unpopular positions. Recent examples include cases against marriage and pregnancy, for treating animals as our equals, and dismissing some widely popular art as aesthetically inferior. What philosophers have done less often is to offer compelling arguments for widespread and established human behavior, like getting married, having children, eating animals, and going to the movies. But if one role for philosophy is to help us reflect on our lives and build sound justifications for our beliefs and actions, it seems odd that philosophers would neglect the development of arguments for the lifestyles most people—including many philosophers—actually lead. Unfortunately, philosophers’ inattention to normalcy has meant that the ways of life that define our modern societies have gone largely without defense, even as whole literatures have emerged to condemn them.

Why It’s OK: The Ethics and Aesthetics of How We Live

seeks to remedy that. It’s a series of books that provides accessible, sound, and often new and creative arguments for widespread ethical and aesthetic values.  Made up of short volumes that assume no previous knowledge of philosophy from the reader, the series recognizes that philosophy is just as important for understanding what we already believe as it is for criticizing the status quo. The series isn’t meant to make us complacent about what we value; rather, it helps and challenges us to think more deeply about the values that give our daily lives meaning.

Why It’s OK to Get Married

Why It’s OK to Eat Meat

Why It’s OK to Mind Your Own Business

Why It’s OK to be Fat

Why It’s OK to Be a Moral Failure

Why It’s OK to Have Bad Grammar and Spelling