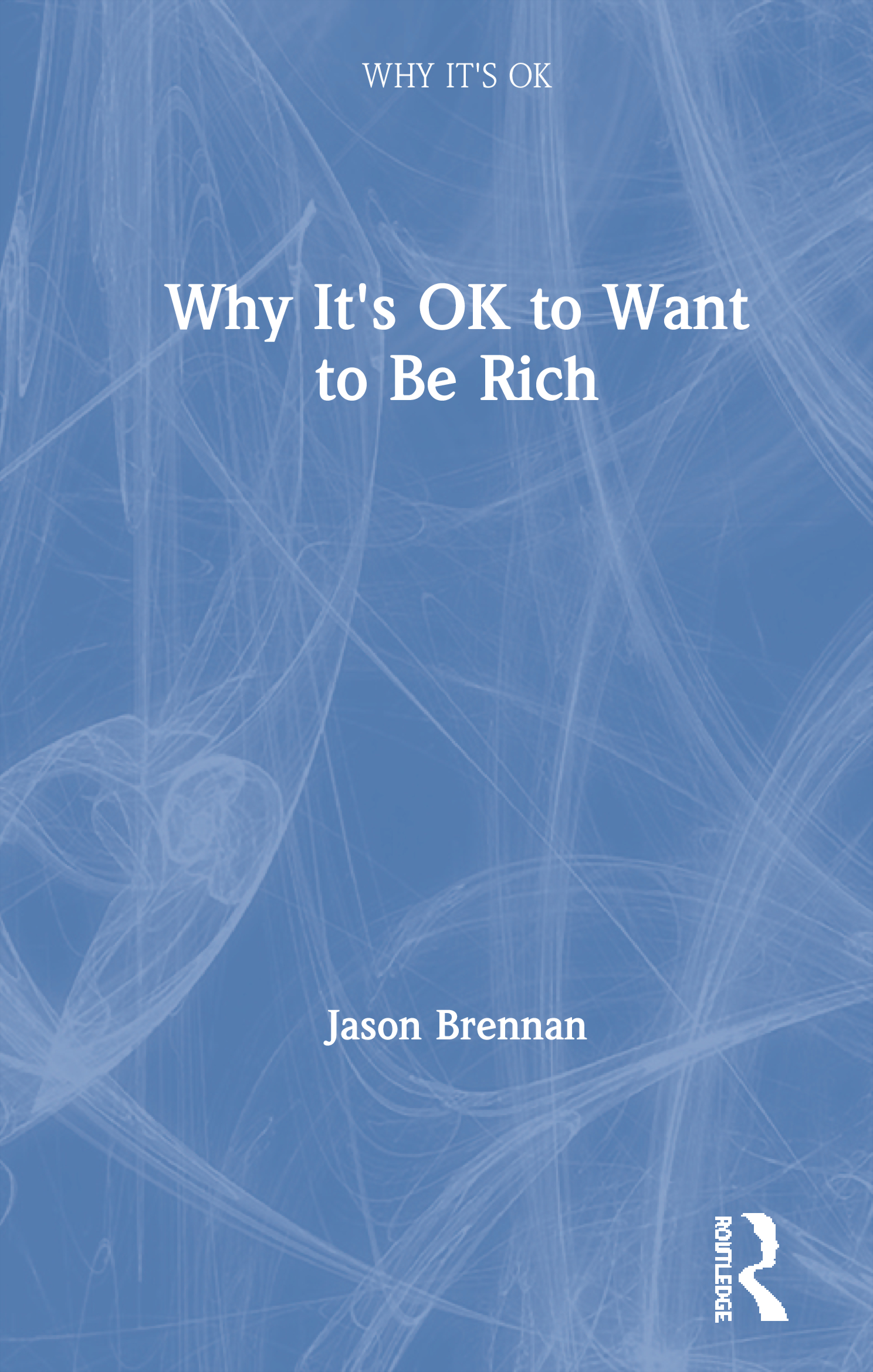 Why It's OK to Want to Be Rich

Finger-wagging moralizers say the love of money is the root of all evil. They assume that making a lot of money requires exploiting others, and that the best way to wash off the resulting stain is to give a lot of it away.

In Why It’s OK to Want to Be Rich, Jason Brennan shows that the moralizers have it backwards. He argues that, in general, the more money you make, the more you already do for others, and that even an average wage earner is productively "giving back" to society just by doing her job. In addition, wealth liberates us to have the best chance of leading a life that’s authentically our own.

Brennan also demonstrates how money-based societies create nicer, more trustworthy, and more cooperative citizens. And in another chapter that takes on the new historians of capitalism, Brennan argues that wealthy nations became wealthy because of their healthy institutions, not from their horrific histories of slavery or colonialism.

While writing that the more money one has, the more one should help others, Brennan also notes that we weren’t born into a perpetual debt to society. It’s OK to get rich and it’s OK to enjoy being rich, too.

"Is it OK to want money? With his trademark blend of philosophical analysis, social scientific data-mining, and norm-busting verbal pyrotechnics, Jason Brennan argues that it’s more than just OK. Wanting to become rich is how we make our world a better place and, along the way, author lives that are genuinely our own."

"Do you own a BMW? Are you already in business school? If so, then maybe put this book down and instead consider getting into something a bit less comfortable by Marx, Fanon, Foucault, or Elizabeth Anderson. But for the rest of us, Why It’s OK to Want to Be Rich is an exhilarating, illuminating, mildly terrifying ride. Provocative and challenging at every beautifully-handled turn, drawing on a wealth of economics and psychology, this direct little book sets out the moral case for money—making it, spending it, even luxuriating in it, and not feeling bad about it. Many of us raised in the wealthiest, most capitalist, happiest societies in human history have been taught to react to such ideas with a complex mixture of rage and guilt. You might already want to throw this book across the room. Fine, fine. But read it first. You might learn something—about money, about markets, about economics, even about yourself. If nothing else, I know of no better, faster introduction to the moral case for capitalism. It is the kind of book that enriches all of us, even if—and perhaps especially if—we are inclined to disagree with it."

1. The Root of All Evils

2. For the Love of Money

3. Is Money Dirty? Does Money Corrupt?

is the Robert J. and Elizabeth Flanagan Family Professor of Strategy, Economics, Ethics, and Public Policy at the McDonough School of Business, Georgetown University. He is the author of fourteen books, including In Defense of Openness (2018) and Why Not Capitalism? (2014).

The Ethics and Aesthetics of How We Live

Philosophers often build cogent arguments for unpopular positions. Recent examples include cases against marriage and pregnancy, for treating animals as our equals, and dismissing some widely popular art as aesthetically inferior. What philosophers have done less often is to offer compelling arguments for widespread and established human behavior, like getting married, having children, eating animals, and going to the movies. But if one role for philosophy is to help us reflect on our lives and build sound justifications for our beliefs and actions, it seems odd that philosophers would neglect the development of arguments for the lifestyles most people—including many philosophers—actually lead. Unfortunately, philosophers’ inattention to normalcy has meant that the ways of life that define our modern societies have gone largely without defense, even as whole literatures have emerged to condemn them.

Why It’s OK: The Ethics and Aesthetics of How We Live

seeks to remedy that. It’s a series of books that provides accessible, sound, and often new and creative arguments for widespread ethical and aesthetic values.  Made up of short volumes that assume no previous knowledge of philosophy from the reader, the series recognizes that philosophy is just as important for understanding what we already believe as it is for criticizing the status quo. The series isn’t meant to make us complacent about what we value; rather, it helps and challenges us to think more deeply about the values that give our daily lives meaning.

Why It’s OK to Get Married

Why It’s OK to Eat Meat

Why It’s OK to Mind Your Own Business

Why It’s OK to be Fat

Why It’s OK to Be a Moral Failure

Why It’s OK to Have Bad Grammar and Spelling