Why Nations Go to War
A Sociology of Military Conflict 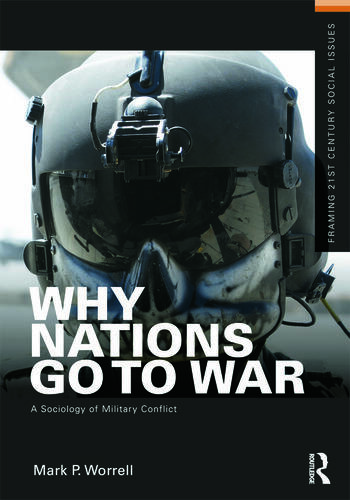 Why Nations Go to War: A Sociology of Military Conflict

The United States has been involved in many wars, sometimes for noble causes like defeating Nazism, and, at other times, it has compromised its own ideals, leading to a lot of soul searching and regrets. Some wars are celebrated as glorious achievements (World War II), some are ‘forgotten’ (Korea), and some are ‘ignored’ (Afghanistan). The current wars in the Middle East represent a complex interplay of motivations, challenges, and threats to America’s role as the world’s democratic leadership. In the case of Afghanistan, we find that during the Cold War the US defense and intelligence apparatus directly and indirectly created an incalculable number of radical extremists that have now turned their sights on their former benefactor. The invasion of Iraq represents a different calculus: under the multitude of rationalizations rests a simple political-economic case of a master nation punishing a disobedient subject. In this brief book, America’s relationship with war is explored with an eye toward changes in capitalism from industrialism to post-industrialism, America’s involvement in the Cold War, nuclear proliferation, terrorism, torture, culture, and ideology.

The goal of this new, unique Series is to offer readable, teachable "thinking frames" on today’s social problems and social issues by leading scholars, all in short 60 page or shorter formats, and available for view on http://routledge.customgateway.com/routledge-social-issues.html

For instructors teaching a wide range of courses in the social sciences, the Routledge Social Issues Collection now offers the best of both worlds: originally written short texts that provide "overviews" to important social issues as well as teachable excerpts from larger works previously published by Routledge and other presses.

1. Introduction 2. The Wars in Iraq and Afghanistan 3. The Economic Functions of War 4. The Social and Cultural Elements of War 5. Conclusion: War and Freedom

Mark P. Worrell teaches Sociological Theory and courses in Politics, Religion, and Culture at the State University of New York at Cortland. Author of one previous book, Dialectic of Solidarity: Labor, Antisemitism, and the Frankfurt School, Professor Worrell has published widely in scholarly journals including Telos, Rethinking Marxism, Fast Capitalism, and Current Perspectives in Social Theory.