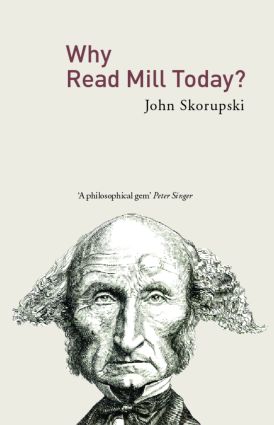 John Stuart Mill is one of the greatest thinkers of the nineteenth century. But does he have anything to teach us today? His deep concern for freedom of the individual is thought by some to be outdated and inadequate to the cultural and religious complexities of twenty first century life. In this succinct and shrewd book, John Skorupski argues that Mill is a profound and inspiring social and political thinker from whom we still have much to learn. He reflects on Mill's central arguments in his most famous works, including "Utilitarianism" and "On Liberty", and traces their implications for democratic politics. With the use of topical and controversial examples, including privacy, religious intolerance, and freedom of speech, he makes Mill's concerns our own at a time when what liberalism means, and why it matters, is once again in dispute. He concludes that Mill's place in the pantheon of 'great thinkers' rests not only on his specific political and social doctrines, but above all on his steadfastly generous and liberal vision of human beings, their relations to one another, and what makes life worth living.

'Even for readers who think they know their Mill, this is a work that will refresh their understanding. It is the best introduction to Mill I have read.'The Philosophers' Magazine'

'Why Read Mill Today? is a marvelously concise, accessible, and engaging discussion of the moral and political philosophy of John Stuart Mill.' - David Brink, University of California at San Diego, USA

'This is an engaging, accessible, and exciting book, which anyone seriously interested in ethics, politics, and the history of ideas should read.' - Roger Crisp, St Anne’s College, Oxford, UK

1. The Good for Human Beings 2. Liberty 3. Democracy 4. Conclusions and Questions

John Skorupski is Professor of Moral Philosophy at the University of St.Andrews. He is the author of John Stuart Mill (Routledge 1989), English Language Philosophy 1750-1945 (OUP 1993), Ethical Explorations (OUP 1999) and editor of The Cambridge Companion to Mill (1995).