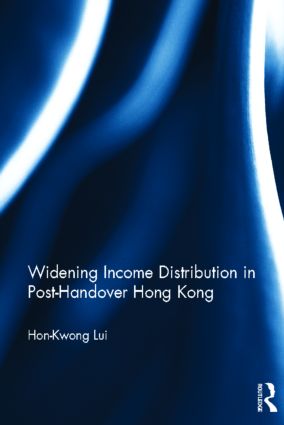 Before the handover to China in 1997, Hong Kong’s economic growth was very strong and the unemployment rate dropped to a record low of 2.2 per cent. In recent years, the widening income dispersion in Hong Kong has caught public attention. This book investigates the economic development and changes in income distribution of Hong Kong from different perspectives.

Based on latest empirical evidence of Hong Kong, the book examines the relationship between economic restructuring and rising income disparity. Public housing programmes in Hong Kong affect half of the population directly and the other half indirectly. This book assesses the redistributive effect of public rental housing on income distribution. Moreover, Hong Kong embarked an ambitious expansion programme of tertiary education in 1989. The expansion represents an exogenous increase in the supply of university graduates and the book evaluates the impact on income distribution. It also investigates the income dispersion among and between natives and immigrants.

Researchers, politicians and policy makers should be interested to learn about the causes of rising income dispersion in post-handover Hong Kong uncovered in this book. Although economic restructuring is named as the prime suspect that caused rising income inequality, the empirical evidence proves otherwise. The book will be of interest to policy makers with implications on social security system and income disparity.

'…To conclude, I would recommend Lui's work to all who want to do something for the poor in Hong Kong, and I am certain that the book will serve well as a solid basis for fruitful discussions on income inequality in the years ahead.' —Nelson Chow, Professor, University of Hong Kong

"Nonetheless, Widening Income Distribution in Post-Handover Hong Kong provides a detailed account of the change in income inequality over a long period of time and provides a solid foundation for future inquiry into inequality in Hong Kong." —Asian Pacific Economic Literature, Volume 28, Issue 2, 2014

1. Introduction 2. Economic Growth and Income Distribution 3. Economic Restructuring and Rising Income Inequality 4. The Effects of the Expansion of Tertiary Education 5. The Redistributive Effect of Public Housing Policy 6. Poverty and the Working Poor 7. Immigrants and Natives 8. Summary and Concluding Remarks

LUI Hon-Kwong received his Ph.D. in economics from The University of Hong Kong and is now Associate Professor at the Department of Marketing and International Business at Lingnan University. He is the author of four books and has published articles in leading and highly respected journals, including Management Science, Urban Studies, Human Relations, Economic Inquiry, and Journal of International Marketing, among many others. Moreover, he has published over 120 commentaries in major newspapers. He has been frequently interviewed by media and invited as guest speaker on various live TV and radio programmes.