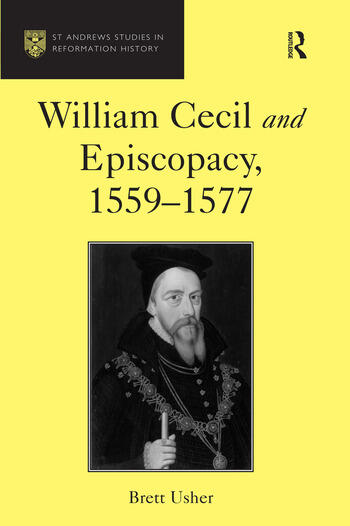 The figure of William Cecil dominates the court of Elizabeth I, and next to the queen herself, no one did more to shape the political, religious and economic landscape of late sixteenth century England. Nowhere is this influence more evident than in the ecclesiastical settlements that Elizabeth imposed on a country wracked by religious divisions and uncertainty. At the very heart of this settlement lay the question of the role of the bishops, and it is to this problem that Cecil was to devote much time and energy. Broadening our understanding of the Elizabethan Church, this study utilises a number of hitherto underused primary sources to re-examine the vexed issue of the role of bishops. It addresses the question of why certain men were appointed bishops whilst others, often seemingly better qualified, were passed over. Taking a broadly chronological approach, this book argues that Cecil, a committed protestant, hoped to remodel espiscopacy along 'reformed' continental lines. Rather than great princes of the church, Cecil envisaged 'superintendents' shorn of much of their traditional temporal power and wealth. Charting the first two decades of Elizabeth's reign it is shown how Cecil tried to convince the queen to abandon the established economic foundations of 'prelacy' in favour of a properly funded superintendency. In this he failed. Yet as long as Cecil remained a dominating voice at the council table the Church of England, through the mediation of a bench of conscientious and hard-working (if often hard-pressed) bishops, was assured of a broad base and an evangelical future. The remainder of Cecil's career, from 1577 to 1598, will be dealt with in a subsequent volume Lord Burghley and Episcopacy.

Contents: Preface; Introduction: Historiographical debates; Cecil's memoranda of 1559; 1559: policies and personalities: The parliamentary settlement; The Act of Exchange; Elizabeth, the Marian hierachy and the reformers; Cecil and the Edwardian hierachy; The drive towards reform: The aftermath of parliament; The July List; Saving the settlement: July-December 1559: The July refusals; A triple crisis: exchange, consecration and crucifixes; The October List and its aftermath; December 1559; further concessions; Cecil deflected: March 1560-March 1562; Parkhurst and Alley; The emergence of Robert Dudley; Dudley and Cecil; The bishops and the exchequer, 1560-62: Bills of restitution; Exeunt sureties; A royal warrant; Exchanges concluded; Northumberland's rapacious ghost; Fiscal conciliation and Lord Robert; Cecil revised: 1562-70: The lean years; Beleagured bishops; Watching and waiting; Fiscal conciliation refined; The vestiarian controversy; The aftermath of rebellion, 1569-73: 'National government'; The replenishment of the bench, 1570-73; Fiscal conciliation perfected; Contrary winds, 1570-76: The bishops and the prophesyings; Parker, conformity and the rise of Christopher Hatton; The Hattonian reaction; Fiscal conciliation in jeopardy; The fall of Grindal revisited; The bishop in his diocese, 1560-76: Clerical tax collection; Arrearages: the Marian subsidy; Episcopal leases; The quest for concealments; Appendix: episcopal leases granted to the Crown, 1568-76; Interim conclusions: 'Elizabeth the avaricious'; The glittering brooch; Appendices; Bibliography; Index.

'Readers who like detective stories [...] will enjoy Usher's verve in turning taxation, land exchanges and long leases into a story of politics, personalities and ecclesiastical intrigue.' The Church Times '... Usher must be admired for his highly engaging literary style and for his respect for the details of history.' Anglican and Episcopal History '... an example of that comparatively rare genre; a piece of genuinely original research... The sequel can only be anticipated with enthusiasm.' Archiv fÃ¼r Reformationsgeschichte '... a significant contribution to our knowledge in rewriting much of the standard account of the Elizabethan settlement and its aftermath... it immediately becomes required reading for all historians of the Elizabethan church...' H-Net Review 'The book highlights the great degree of continuity - in terms of both ideology and personalities - between Edward's reign and that of Elizabeth, and revises historical opinion in two important ways: it puts paid to the idea that Elizabethan government intentionally exploited sede vacante opportunities; and it gives the reader a clear picture of hardworking, conscientious bishops, laying to rest the old chestnut that they were merely timeserving opportunists.' Sixteenth Century Journal 'Usher's careful and impressive book confirms the trajectory of much recent scholarship on the Elizabethan church by mining underused financial records, adding this to the other evidence that has been drawn upon to establish that church as thoroughly Protestant and largely Calvinist, however much elements of an older medieval fabric and structure survived.' Church History