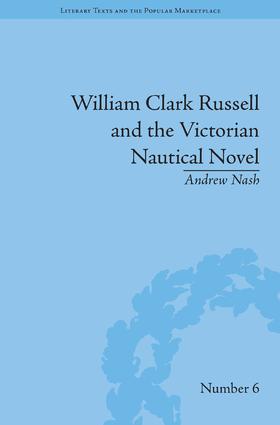 William Clark Russell wrote more than forty nautical novels. Immensely popular in their time, his works were admired by contemporary writers, such as Conan Doyle, Stevenson and Meredith, while Swinburne, considered him 'the greatest master of the sea, living or dead'. Based on extensive archival research, Nash explores this remarkable career.

Andrew Nash is Associate Professor in English Literature and Director of Teaching and Learning for the School of Literature and Languages at the University of Reading.

Literary Texts and the Popular Marketplace

In the past, the critics and writers who formulated the boundaries of the literary canon in British literature restricted its membership to ‘high culture’ and the ‘highbrow’. Writers whose work lies outside these selectively applied parameters of literary taste and value have been assigned to the derogatory category of ‘middlebrow’ or ‘popular’ literature. Some of these writers were rejected from the canon by their willing embrace of popular appeal, and their openness to a wide readership. Many texts were not included because they were written by women, addressed women’s concerns, or because they were concerned with middle- and working-class values and aspirations that were inimical to the literature of high culture. Other categories that have been disadvantaged by the institutional application of canonicity in British literary culture include regionality, the literature of impairment, political stance, and writers of colour.

This series offers monographs and edited collections of essays that examine the extents and effects of writing that resists the regulation of the canon. Crossing both cultural and geographic boundaries, this series brings together studies of texts, writers, readers, producers, and distributors. It will highlight current debates about the politics of mainstream readerships and media, about the designation of audiences and material methods of circulation, and will address contemporary critical concerns. By attending to how these texts resist the ‘high’ cultural imperative the works in this series make it possible to learn how culture is commodified for particular classes, and the role that gender and social class play in the production of those categories.

Manuscripts should be in the range of 80,000 to 100,000 words. Proposals should be eight to ten pages in length and should include a brief overview of the relevant scholarship in the field, the contribution which your work will make, a breakdown of the contents by chapter, an account of the number and type of illustrations, a brief survey of competing works, to whom the proposed book could be marketed, and the intended audience. Proposals should include a minimum of two sample chapters.