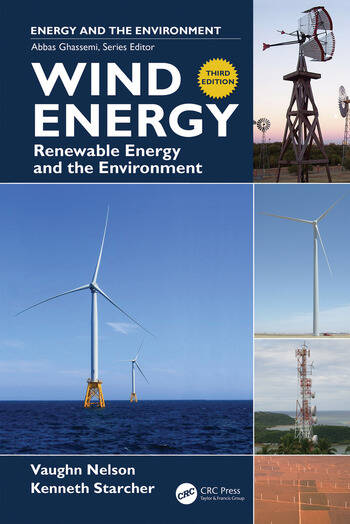 The utilization of wind power and other renewable energy sources has been growing at a phenomenal rate. Wind Energy, Third Edition explores the wind industry from its inception in the 1970s to today; presents the design, aerodynamics, operation, control, applications, as well as different types of wind turbines. An overview of energy examines world consumption and use of fossil fuels, and includes a section on global climate change. It covers the characteristics of wind, such as shear, power potential, and turbulence, and discusses the measurement and siting of individual wind turbines and wind farms. It also discusses the political and economic factors regarding the adoption of wind as an energy source.

Dr. Vaughn Nelson has been involved with renewable energy, primarily wind energy, since the early 1970s. He is the author of four books (five books on CD) and has published more than 50 articles and reports. He also served as the principal investigator on numerous grants and conducted more than 60 workshops and seminars from local to international levels. Dr. Nelson’s primary work focused on wind resource assessment, education and training, applied research and development, and rural applications of wind energy. Presently, he is a Professor Emeritus of physics at West Texas A&M University (WTAMU). He retired as the Dean of the Graduate School, Research, and Information Technology in 2001. He was founder of the Alternative Energy Institute (AEI) and director from its inception in 1977 through 2003. He returned as director for another year in July 2009. The Alternative Energy Institute was terminated in 2015. Dr. Nelson served on a number of State of Texas Committees, most notably the Texas Energy Coordination Council, for 11 years. He received three awards from the American Wind Energy Association, one of which was the Lifetime Achievement Award in 2003, was named a Texas Wind Legend by the Texas Renewable Industries Association in 2010, and received an award for Outstanding Wind Leadership in Education from Wind Powering America in 2013. He also served on the boards of directors for state and national renewable energy organizations. In the series, Energy and the Environment, Dr. Nelson is the author of Wind Energy (2009; Second Edition, 2013) and Introduction to Renewable Energy (2011) and with Kenneth Starcher the Second Edition (2015) and also with Kenneth Starcher, Introduction to Bioenergy (2016). Dr. Nelson earned a PhD in physics from the University of Kansas, an EdM from Harvard University, and a BSE from Kansas State Teachers College in Emporia. He was a member of the Departamento de Fisica, Universidad de Oriente, Cumana, Venezuela for 2 years and then was at WTAMU from 1969 until his retirement.

began his college career and involvement with renewables the same semester, Fall 1976. It led to a BS in physics/computer science at West Texas State University (1980) and then in 1980–1981 he was at Texas Tech University taking courses in electrical engineering, electronics, and physics. He received an MS in engineering technology at WTAMU (1995), and then took some courses in agricultural economics at WTAMU. Starcher has been the field worker for most of the projects at the Alternative Energy Institute (AEI) since 1980. He has been the educational funnel for on-site training and public information for students and public workshops for AEI. He has served as a trainer at wind and solar training workshops locally, nationally, and internationally. He served as a research technician, research associate, assistant director, director, and associate director (Training, Education and Outreach) for the Alternative Energy Institute from 1977 to 2015. He served as a board member of the American Wind Energy Association, was on the Executive Board of Class 4 Winds and Renewables, was chosen as the Individual Member of the year for the Texas Renewable Energy Association in 2005, the Small Wind Educator at the Small Wind Conference in 2010, and was awarded an Outstanding Wind Leadership Education Award from Wind Powering America in 2013. Starcher has installed and operated more than 85 different renewable energy systems, ranging in scale from 50 W to 500 kW. He has served as a consultant for wind companies in the United States and produced wind resources maps for U.S. counties and states, as well as for Honduras and Thailand.