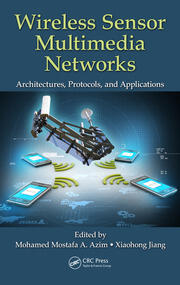 Wireless sensor networks (WSNs) are a special class of ad hoc network in which network nodes composed of tiny sensors pass data such as temperature, pressure, and humidity through the network to a central location. Wireless sensor multimedia networks (WSMNs) are a special category of WSNs in which the sensor nodes are small cameras and microphones that can send voice, image, or video data through the network. This book presents the latest advances and research in WSMN architecture, algorithms, and protocols.

discusses open research issues and future trends in WSMNs. With this book, academic researchers, engineers, and graduate students will be well-equipped to advance the research in this emerging field.

Mohamed Mostafa A. Azim earned his BSc in electrical engineering from Cairo University, Giza, Egypt, in 1994, his MSc jointly from the Fontys University, Eindhoven, the Netherlands, and the Eindhoven University of Technology, Eindhoven, the Netherlands, in 1997, and his PhD in computer sciences from Tohoku University, Sendai, Japan, in 2006. He is the associate professor of electronics technology, Beni-suef University, Beni-suef, Egypt. In 2008, he joined the College of Computer Science and Engineering at Taibah University, Madina, KSA. In 2012, he became the Chair of Networks and Communication Systems Department. Dr. Azim has authored the book, Optical Networks: A Restoration Perspective with Active Restoration. He has also authored several research papers in the most reputed journals and conferences. He is a working group member of IEEE 1903 standard on Next-Generation Service Overlay Networks (NGSON). He is a member of the editorial boards of the International Journal of Sensor and Related Networks and International Journal of Communication Networks and Information Security (IJCNIS). His current research interests include network modeling and simulation, routing and security protocols for wireless sensor networks and wireless multimedia sensor networks, and optical networks survivability.

earned his BS, MS, and PhD in 1989, 1992, and 1999, respectively, all from Xidian University, Xi’an, China. He is currently a full professor at Future University, Hakodate, Japan. Before joining Future University, Dr. Jiang was an associate professor at the Tohoku University from February 2005 to March 2010. He was an assistant professor at the Graduate School of Information Science, Japan Advanced Institute of Science and Technology (JAIST), from October 2001 to January 2005. Dr. Jiang was a JSPS (Japan Society for the Promotion of Science) postdoctoral research fellow at JAIST from October 1999 to October 2001. He was a research associate in the Department of Electronics and Electrical Engineering, the University of Edinburgh, from March 1999 to October 1999. Dr. Jiang’s research interests include computer communications networks, mainly wireless networks and optical networks; routers/switches design for high-performance networks; and network security. He has published over 260 technical papers in premium international journals and presented at conferences, including over 30 papers published in top IEEE journals and top IEEE conferences, such as IEEE/ACM Transactions on Networking, IEEE Journal of Selected Areas on Communications, and IEEE INFOCOM. Dr. Jiang was the winner of both the Best Paper Award and the Outstanding Paper Award of IEEE HPCC 2014, IEEE WCNC 2008, IEEE ICC 2005-Optical Networking Symposium, and IEEE/IEICE HPSR 2002. He is a senior member of IEEE and also a member of ACM and IEICE.