Wish-fulfilment in Philosophy and Psychoanalysis
The tyranny of desire 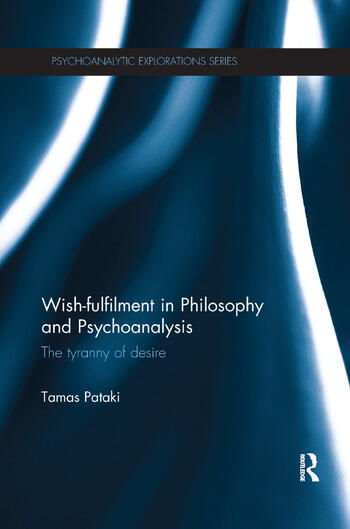 Wish-fulfilment in Philosophy and Psychoanalysis: The tyranny of desire

Wish-fulfilment as a singular means of satisfying ineluctable desire is a pivotal concept in classical psychoanalysis. Freud argued that it was the thread that united dreams, daydreams, phantasy, omnipotent thinking, neurotic and some psychotic symptoms such as hallucinations and delusions, art, myth, and religious illusions. The concept's theoretical exploration has been largely neglected within psychoanalysis since, but contemporary philosophers have recognised it as providing an explanatory model for much of the kind of irrational behaviour so problematic for psychiatry, social psychology and the philosophy of mind.

Although critically neglected in contemporary psychological and psychoanalytic thought, the concept remains clinically fundamental, under different labels: it encompasses the processes of omnipotent phantasy, symbolic or substitutive satisfaction, actualisation in transference and acting out, symptom formation and defenses such as projective identification. Wish-fulfilment can be shown to be a specifically psychoanalytic compartment of a common-sense psychological theory of action that illuminates not just clinical material but also the paradoxes of irrationality – such as weakness of will and self-deception – that preoccupy philosophers.

The first half of this book develops a comprehensive and novel theory of wish-fulfilment, explores its radical implications for the structure of mind, and locates it against the backdrop of both contemporary psychoanalytic and philosophical thought. In the second half, the book applies the theory to illuminate important features of self-deception and delusion, religion, insanity defences, creative writing and the exclusion of mind and intention in the biological drift of modern psychiatry.

The book will be essential to philosophers of mind, psychoanalysts, psychiatrists, psychologists, social theorists, and students in these disciplines; as well as readers interested in understanding how the mind works in mental illness, self-deception, religion, and creative writing.

Tamas Pataki is Honorary Senior Fellow in the School of Historical and Philosophical Studies, University of Melbourne. He is the author of Against Religion (2007) and co-editor with Michael Levine of Racism in Mind (2004).

'At times Pataki takes his argument into very difficult terrain, which presents a challenge to someone, like this reviewer, with little formal philosophical training. This book will appeal more to the philosophers than the psychoanalysts, and yet I think there are real potential rewards for the psychoanalyst willing to make the effort to follow Pataki’s argument. Not the least of these rewards is an opportunity to strengthen one’s ‘conceptual analysis muscle’, in the course of the exercise! ... Pataki has attempted an interpenetration of psychoanalytic and philosophical understandings without deterioration on either side, and in this I think he has largely succeeded.' - Paul Schimmel in The International Journal of Psychoanalysis, 2015

'some of the richest material in the book comes when Pataki is demonstrating the explanatory payoffs of his theory of wish-fulfillment. Indeed, one of the benefits of Pataki's account is that it can illuminate a much wider range of phenomena than is possible if wish-fulfillment is deflated to be a purely causal phenomenon. In the second half of the book Pataki goes on to apply his theory to delusion and self-deception, the psychological origins of religious belief, creative writing, and the insanity defense in jurisprudence. Indeed, it may be that the light that Pataki's theory is able to cast on a wide range of psychological and cultural phenomena leads the reader to bite the bullet and accept that agency goes much deeper than we have traditionally thought to be the case. In any case, this is a deep and interesting book, and although it is in some ways unfashionable in the context of the contemporary literature it is nonetheless quite compelling in the way it presents the case for the centrality of wish-fulfillment in human mindedness.' - Andrew C. Sims, Deakin University, Australia, in Frontiers in Psychology, November 2014