Witchcraft, Madness, Society, and Religion in Early Modern Germany
A Ship of Fools 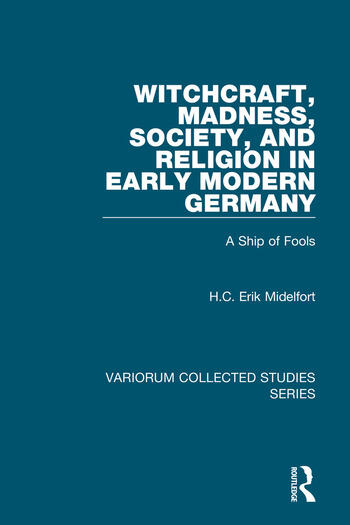 Witchcraft, Madness, Society, and Religion in Early Modern Germany: A Ship of Fools

H.C. Erik Midelfort has carved out a reputation for innovative work on early modern German history, with a particular focus on the social history of ideas and religion. This collection pulls together some of his best work on the related subjects of witchcraft, the history of madness and psychology, demonology, exorcism, and the social history of religious change in early modern Europe. Several of the pieces reprinted here constitute reviews of recent scholarly literature on their topics, while others offer sharp departures from conventional wisdom. A critique of Michel Foucault’s view of the history of madness proved both stimulating but irritating to Foucault’s most faithful readers, so it is reprinted here along with a short retrospective comment by the author. Another focus of this collection is the social history of the Holy Roman Empire, where towns, peasants, and noble families developed different perceptions of the Protestant and Catholic Reformations and of the options the religious revolutions of the sixteenth century offered. Finally, this collection also brings together articles which show how Freudian psychoanalysis and academic sociology have filtered and interpreted the history of early modern Germany.

Contents: Introduction: history and the sense of surprise; Part I The Historiography of Witchcraft: Witchcraft, magic and the occult; Witchcraft. Part II Demons and Witchcraft: Were there really witches?; Catholic and Lutheran reactions to demonic possession in the late 17th century: two case histories; Witch craze? Beyond the legends of panic. Part III The German Reformation and German Religious History: Toward a social history of ideas in the German Reformation; Social history and the Biblical exegesis: community, family and witchcraft in 16th-century Germany; The Reformation and the early social sciences (Marx, Weber, Durkheim, Freud): toward a cultural epidemiology; The worst book in the world. Part IV German Nobles: Curious Georgics: the German nobility and their crisis of legitimacy in the late 16th century; The Reformation and the German nobility. Part V Historical Psychology and the Problem of Madness: Madness and civilization in early modern Europe: a reappraisal of Michel Foucault; Reading and believing. On the reappraisal of Michel Foucault; Madness and the millennium at Münster, 1534-1535; Charcot, Freud and the demons; Index.

H.C. Erik Midelfort is Professor Emeritus at the University of Virginia, USA.