Witchcraft, the Devil, and Emotions in Early Modern England 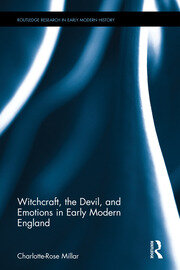 Witchcraft, the Devil, and Emotions in Early Modern England

1. The Devil in Early Modern England

2. The Role of the Familiar

Charlotte-Rose Millar is a UQ Fellow in the Institute for Advanced Studies in the Humanities at the University of Queensland and an Associate Investigator with the ARC Centre of Excellence for the History of Emotions (1100-1800). She obtained her PhD from the University of Melbourne in 2015. Millar has published numerous articles and book chapters on witchcraft, diabolism, emotions and sexual practices and has won two prizes for her published work. Her 2015 article on sexual relations between witches and devils has been labelled as the definitive piece on the issue.

"In this fascinating and incisive re-reading of cheap printed sources, Charlotte-Rose Millar restores two vital elements to a conception of witchcraft that early modern people understood implicitly, but which many historians either overlook or underplay. The first of these is the devil, the second is emotion. This book’s importance lies mainly in its compelling portrayal of witchcraft accusations as critical moments when rage and fear and envy boiled over, and its expert analysis of how emotion fused with suspicion and belief to give physical shape and substance to the witch. Seen thus, witches emerge as enemies to the community who were not merely malicious and magical but in intimate and deadly league with Satan."

"Charlotte-Rose Millar's insightful study of 66 pamphlets spread over almost 200 years offers a revisionist reading of these fascinating and vivid accounts. This includes a greater focus on diabolism and on newly-emergent topics such as animal familiars and emotional history. Millar's broad and detailed survey demonstrates both continuities and changes across the period, and deepens understanding of the pamphlets' context and major themes because of its long historical reach. The book includes a very useful bibliography and it is beautifully illustrated with images from the pamphlets."

"Charlotte-Rose Millar's Witchcraft, the Devil, and Emotions in Early Modern England is an original, and important contribution to English witchcraft studies. This is the first book to offer an exhaustive analysis of English witchcraft pamphlets, an unusually rich source. She uses these pamphlets to emphasise the diabolic aspects of English witchcraft beliefs, and offers exciting new insights into such topics as sex with the devil, the role of the familiar, and the place of witchcraft accusations in the history of the emotions."

"Millar focuses on important sources which help us to reconstruct popular depictions of witchcraft, while other scholars have chosen to deal with learned sources, such as demonological treatises or trials records, where the documents are manipulated by judges. Millar’s book is a successful attempt to investigate a very complex historical (and historiographical) issue, highlighting an important source – witchcraft pamphlets over a long period – which emphasise continuity and change in English witchcraft beliefs and the central role of the Devil."