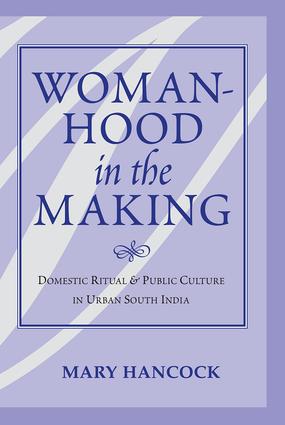 Womanhood In The Making

In this book, Mary Hancock challenges readers to rethink the notions of tradition and modernity that have figured centrally in anthropological discussions of social change in South Asia. She shows tradition and modernity to be categories created, deployed, and objectified by Tamil Brahmans as they produce their own class, gender, national, and sectarian identities. This highly original ethnographic analysis of Brahman women's ritualized practice demonstrates how tradition and modernity?and the shifting boundaries between them?are explicitly and implicitly produced and reworked on the body of the ideal, auspicious married woman. Through case studies of women's religious practices, the book reveals how female subjectivities are invented and reworked through ritually mediated relations among women and between women and the powerful goddesses to whom they are devoted.Womanhood in the Making: Domestic Ritual and Public Culture in Urban South India asks readers to rethink not only their images of Hindu women, but also the history of anthropological study of India. Hancock shows how anthropological categories of analysis are produced and deployed by both ethnographers and their informants in cultural brokerage, in elite nationalisms, and in Milton Singer's foundational study of social change in South Asia.Provocative and engaging, this work will interest scholars and students of anthropology, history, cultural studies, women's studies, and religion.

Mary Hancock is assistant professor of anthropology at the University of California at Santa Barbara.