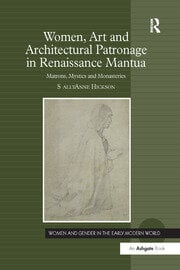 Analyzing the artistic patronage of famous and lesser known women of Renaissance Mantua, and introducing new patronage paradigms that existed among those women, this study sheds new light the social, cultural and religious impact of the cult of female mystics of that city in the late fifteenth and early sixteenth century. Author Sally Hickson combines primary archival research, contextual analysis of the climate of female mysticism, and a re-examination of a number of visual objects (particularly altarpieces devoted to local beatae, saints and female founders of religious orders) to delineate ties between women both outside and inside the convent walls. The study contests the accepted perception of Isabella d'Este as a purely secular patron, exposing her role as a religious patron as well. Hickson introduces the figure of Margherita Cantelma and documents concerning the building and decoration of her monastery on the part of Isabella d'Este; and draws attention to the cultural and political activities of nuns of the Gonzaga family, particularly Isabella's daughter Livia Gonzaga who became a powerful agent in Mantuan civic life. Women, Art and Architectural Patronage in Renaissance Mantua provides insight into a complex and fluid world of sacred patronage, devotional practices and religious roles of secular women as well as nuns in Renaissance Mantua.

Sally Hickson is Associate Professor of Art History at the University of Guelph (Canada), where she teaches Italian Renaissance and Baroque art and architecture.

'Hickson widens the scope of Isabella d'Este's art patronage and explores its relationship to other court women's commissioning of art by calling attention to the marchesa's virtually overlooked spirituality and monastic projects and demonstrating their effect on her daughters and daughter-in-law... The interaction between the lay and religious Gonzaga women that the author proposes offers important insights into women's artistic practices and the female networks that linked them during the first half of the sixteenth century. All in all, the book provides solid evidence that Isabella's artistic endeavors were richer and more influential than assumed in the existing scholarship.' Jeryldene Wood, University of Illinois, Urbana-Champaign, USA

'Sally Hickson’s monograph takes as a point of departure Isabella d’Este in her widowhood, by 1518 a patron of devout imagery. The book defines networks between her female relatives and friends to present a complex and sympathetic study of the intertwined patronage of Mantuan women in mourning over several generations.' Renaissance Quarterly

'As a whole, the volume’s five chapters present a refreshingly original picture of how partnerships between Mantua’s secular women and nuns defined spiritual values while contributing to the city’s built and visual environment during the early years of the Catholic Reformation.' CAA Reviews

'... this book offers scholars a much-needed look at Isabella d’Este’s religious patronage and provides an important introduction to several women whose activities nuance our understanding of early modern spirituality. Hickson’s initial foray into the complex networks of female piety that coalesced within the ruling family of sixteenth-century Mantua should prompt others to explore the topic further.' American Historical Review

'... a welcome break away from traditionally secular models of Gonzaga court patronage by focusing on Isabella d'Este's under-explored activities as a patron of religious projects. In doing so, the well-known Isabella becomes a vehicle for studying a network of previously hidden secular women and nuns, who emerge for the first time as a defining feature of Mantua's spiritual and built landscape during the earliest period of the Catholic Reformation.' European History Quarterly

'Hickson's archival work is to be applauded, and she successfully examines several fascinating examples of religious art patronage. These case studies offer further important examples of ties forged between convents and the outside world, and of the cultural as well as religious significance of the 'living saints' of Renaissance Italy.' Ecclesiastical History