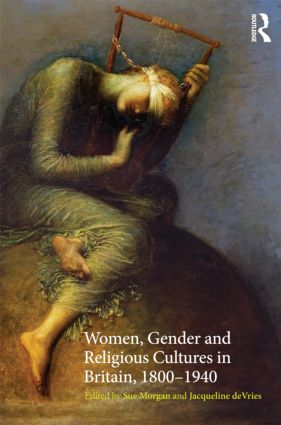 This volume is the first comprehensive overview of women, gender and religious change in modern Britain spanning from the evangelical revival of the early 1800s to interwar debates over women’s roles and ministry.

This collection of pieces by key scholars combines cross-disciplinary insights from history, gender studies, theology, literature, religious studies, sexuality and postcolonial studies. The book takes a thematic approach, providing students and scholars with a clear and comparative examination of ten significant areas of cultural activity that both shaped, and were shaped by women’s religious beliefs and practices: family life, literary and theological discourses, philanthropic networks, sisterhoods and deaconess institutions, revivals and preaching ministry, missionary organisations, national and transnational political reform networks, sexual ideas and practices, feminist communities, and alternative spiritual traditions. Together, the volume challenges widely-held truisms about the increasingly private and domesticated nature of faith, the feminisation of religion and the relationship between secularisation and modern life.

Including case studies, further reading lists, and a survey of the existing scholarship, and with a British rather than Anglo-centric approach, this is an ideal book for anyone interested in women's religious experiences across the nineteeth and twentieth centuries.

'This volume makes an excellent contribution to the field of religious and gender history, properly marking the revival of interest in religion within British cultural and social history that has been quietly developing over the past decade … as a whole this book provides exactly what the field needs: a discussion of British Christianity which explores women's agency in their encounter with Christian discourses; which offers an interrogation of the categories of the sacred and the secular; and which examines the profound connections between (expansive and flexible) Christian cultures and the histories of sexuality, reform, feminism, the family and domesticity.' – Reviews in History

'Women, Gender and Religious Cultures in Britain, 1800-1940, should be read and used by anyone interested in nineteenth-century British women's history.' – Anglican and Episcopal History

'Morgan and deVries's collection…rethinks popular trends and assumptions in the scholarship of gender studies and religion, demanding a high level of intellectual rigor regarding topics that often encourage glib assumptions and simple dichotomies. Anyone doing work on gender and religion would profit from reading this book.' – Victorian Studies

Sue Morgan is Reader in Women’s and Gender History at the University of Chichester. Her publications include Women, Religion and Feminism in Britain, 1750-1900 (2002) and The Feminist History Reader (2006).

Jacqueline deVries is Associate Professor of History at Augsburg College in Minneapolis. She has published a number of essays on the intersections among religion, gender, feminism and war, and is co-author, with Cheri Register, of Living Faith (2007).