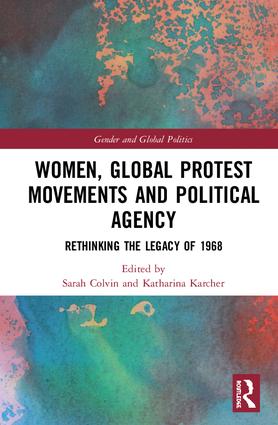 Rethinking the Legacy of 1968, 1st Edition

This volume analyses and historicises the memory of 1968 (understood as a marker of an emerging will for social change around the turn of that decade, rather than as a particular calendar year), focusing on cultural memory of the powerful signifier '68' and women’s experience of revolutionary agency.

After an opening interrogation of the historical and contemporary significance of "1968" – why does it still matter? how and why is it remembered in the contexts of gender and geopolitics? and what implications does it have for broader feminist understandings of women and revolutionary agency? – the contributors explore women’s historical involvement in "1968" in different parts of the world and the different ways in which women’s experience as victims and perpetrators of violence are remembered and understood.

This work will be of great interest to students and scholars of protest and violence in the fields of history, politics and international relations, sociology, cultural studies, and women’s studies.

Introduction: 1968 – the year that rocked whose world? [Sarah Colvin and Katharina Karcher] PART I: Gender and Cultural Memory 1. Remembering 1968: Feminist Perspectives [Kristina Schulz] 2. Despite, or in Debt to 1968? Second-Wave Feminism and the Gendered History of Italy’s 1968 [Andrea Hajek] 3. Transnational Memories and Gender: Northern Ireland’s 1968 [Chris Reynolds] PART II: Violence and/as Counterviolence 4. On Liberated Women in an Un-Liberated Society: Ula Stöckl’s The Cat Has Nine Lives (1968) [Christina Gerhardt] 5. Feminism and Violence against Women in Yugoslavia during State Socialism [Zsófia Lóránd] 6. Murder is a Feminist Issue: The Case of Marion Ihns and Judy Andersen [Clare Bielby] PART III: Women as Violent Actors 7. Coherence in Contradiction: The Spectacle of the Female Terrorist [Dominique Grisard] 8. The Japanese Left and the ‘Muslim World’ [Claudia Derichs] 9. ‘The Mood was an Explosion of Freedom’: The 1968 Movement and the Participation of Women Fighters during the Lebanese Civil War [Jennifer Philippa Eggert] 10. Women of Jihad [Daniela Pisoiu]

Sarah Colvin is the Schröder Professor of German at the University of Cambridge, UK. Her recent book publications include Ulrike Meinhof and West German Terrorism (2009), Women and Death: Warlike Women in the German Literary and Cultural Imagination (co-editor, 2009) and The Routledge Handbook of German Politics and Culture (editor; Routledge 2015).

Katharina Karcher is Lecturer in German Cultural Studies at the University of Bristol, UK. Her research interests include feminist theory, European women’s movements, and the history of political protest, extremism and violence in the Federal Republic of Germany. She is the author of ‘Sisters in Arms?’ – Militant Feminisms in the Federal Republic of Germany since 1968 (2017).

There is growing recognition both within the academy and in global political institutions that gender matters in and to the practices of global politics. From the governance of peace and security, to the provision of funds for development initiatives, via transnational advocacy networks linked through strategic engagement with new forms of media, these processes have a gendered dimension that is made visible through empirically grounded and theoretically sophisticated feminist work.

The series aims to be genuinely global in scope. We welcome submissions from scholars in/of the global South and support scholars for whom English is a second or other language through the publication process with dedicated editorial assistance. The series is also multi-disciplinary, publishing work from across the Arts, Humanities and Social Sciences with a global aspect and political focus.