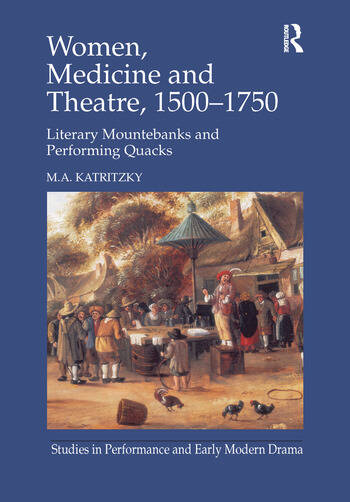 Well illustrated, accessibly presented, and drawing on a comprehensive range of historical documents, including British, German and other European images, and literary as well as non-literary texts (many previously unconsidered in this context), this study offers the first interdisciplinary gendered assessment of early modern performing itinerant healers (mountebanks, charlatans and quacksalvers). As Katritzky shows, quacks, male or female, combined, in widely varying proportions, three elements: the medical, the itinerant and the theatrical. Above all, they were performers. They used theatricality, in its widest possible sense, to attract customers and to promote and advertise their pharmaceuticals and health care services. Katritzky investigates here the performative aspects of quack marketing and healing methods, and their profound links with the rise of Europe’s professional actresses, fields of enquiry which are only now beginning to attract significant attention from historians of medicine, economics or the theatre. Women, Medicine and Theatre also recovers women’s roles in the economy of the itinerant quack stage. Women associated with mountebank troupes were medically and theatrically active at every level from major stage celebrities to humble urine sample collectors, but also included sedentary relatives, non-performing assistants, door- and bookkeepers, wardrobe mistresses, prop and costume loaners, landladies, spectators, patrons and clients. Katritzky’s study of the whole range of women who supported the troupes contextualizes the activities of their male counterparts, and rehabilitates a broad spectrum of diversely occupied women. The strength of this title’s research method lies in its comparative examination of documents that are generally examined from the point of view of either their performative or their medical aspects, by historians of, respectively, the theatre and medicine. Taken as a whole, these handbills, literary descriptions a

M.A. Katritzky is Barbara Wilkes Research Fellow in Theatre Studies in the Literature Department of The Open University, UK, and author of The Art of Commedia: A study in the commedia dell’arte 1560-1620 with special reference to the visual records (2006).

'Katritzky's main focus is on plays and players, but the author's assiduous research has assembled as much as could be hoped for on the extremely elusive presence of women in early modern performative medicine. This detailed study provides a storehouse of invaluable information, as well as decisive interventions in debates over the nature of early modern theatre.' Margaret Pelling, University of Oxford ’... impressively researched... A brief review can only suggest the wealth of examples and the depth of research that make this 'gendered' history of early modern theatrical practice an indispensable work in the field... the rich cultural context Katritzky provides makes the book a valuable resource for those engaged in more specialized studies.’ Renaissance Quarterly ’M. A. Katritzky's Women, Medicine and Theatre presents a fascinating wealth of visual and textual evidence signally important connections between women's roles in the theatricality of itinerant medical practitioners (mountebanks or quacks), and more literary or professional dramatic practice. ... Offering material that crosses European national borders, with particular focus on the Italian, English and German-speaking traditions, the book is spatially as well as temporally broad in scope, with good reason. ... Indeed, anyone with primary interest in a single national theatre, say in Shakespeare's England, should be attentive to Professor katritzky's evidence pointing toward much more entangled international practices. Her comparative and interdisciplinary approach is both exciting and welcome.’ Cahiers Elisabéthains ’In an era when many scholars seem to do everything they can to avoid archives, this scholar dives into them not only with energy and persistence, but with the tools necessary to evaluate and communicate what she finds. Her bibliographies are treasure troves, especially of things German. She also has amassed a remarkable catalog of visual resources, including many in priva