Women, Men and Language
A Sociolinguistic Account of Gender Differences in Language 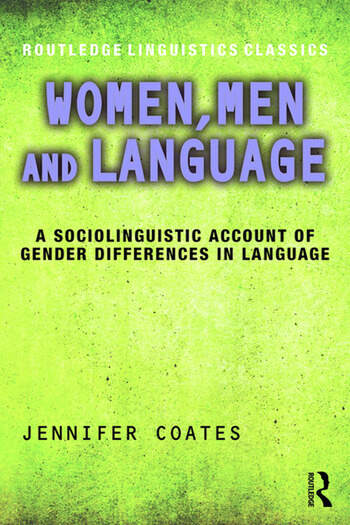 Women, Men and Language: A Sociolinguistic Account of Gender Differences in Language

Women, Men and Language has long been established as a seminal text in the field of language and gender, providing an account of the many ways in which language and gender intersect. In this pioneering book, bestselling author Jennifer Coates explores linguistic gender differences, introducing the reader to a wide range of sociolinguistic research in the field.

Written in a clear and accessible manner, this book introduces the idea of gender as a social construct, and covers key topics such as conversational practice, same sex talk, conversational dominance, and children’s acquisition of gender-differentiated language, discussing the social and linguistic consequences of these patterns of talk.

Here reissued as a Routledge Linguistics Classic, this book contains a brand new preface which situates this text in the modern day study of language and gender, covering the postmodern shift in the understanding of gender and language, and assessing the book’s impact on the field. Women, Men and Language continues to be essential reading for any student or researcher working in the area of language and gender.

PART FOUR: LOOKING TO THE FUTURE
12 New developments in language and gender research

Jennifer Coates is Emeritus Professor of English Language and Linguistics at the University of Roehampton, UK.

Praise for Jennifer Coates and Women, Men and Language:

"This new reissue is a significant contribution to the study of gender, offering comprehensive coverage on the complexity of the links between language and gender, and the continuing link between gender and inequality".
Isabelle Lemée, Lakehead University, Canada

"Those who, like me, have used this book in their language and gender courses, will warmly welcome this third edition, which brings both the material surveyed and the perspectives covered into the 21st century. Jennifer Coates' lucid and engaging style continues to make this a very attractive text."
Janet Holmes, Victoria University of Wellington, New Zealand

"Women, Men and Language has served readers since its first publication as an accessible and balanced guide to the literature on gender differences in language. This revised third edition extends the book's scope to reflect recent developments in theory and research, while retaining the clarity of earlier versions. Informative, wide-ranging and always readable, the updated text provides 21st century students and their teachers with an invaluable overview of an increasingly complex field."
Deborah Cameron, University of Oxford, UK

"Coates' work has had a major influence on the study of language and gender, and one could easily argue that her book,Women, Men and Language, basically created the field."
Scott F. Kiesling, University of Pittsburgh, USA