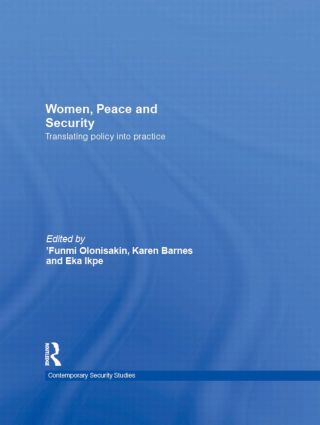 This book provides a critical assessment of the impact of UN Resolution 1325 by examining the effect of peacebuilding missions on increasing gender equality within conflict-affected countries.

UN Resolution 1325 was adopted in October 2000, and was the first time that the security concerns of women in situations of armed conflict and their role in peacebuilding was placed on the agenda of the UN Security Council. It was an important step forward in terms of bringing women’s rights and gender equality to bear in the UN’s peace and security agenda. More than a decade after the adoption of this Resolution, its practical reality is yet to be substantially felt on the ground in the very societies and regions where women remain disproportionately affected by armed conflict and grossly under-represented in peace processes. This realization, in part, led to the adoption in 2008 and 2009 of three other Security Council Resolutions, on sexual violence in conflict, violence against women, and for the development of indicators to measure progress in addressing women, peace and security issues.

The book draws together the findings from eight countries and four regional contexts to provide guidance on how the impact of Resolution 1325 can be measured, and how peacekeeping operations could improve their capacity to effectively engender security.

This book will be of much interest to students of peacebuilding, gender studies, the United Nations, international security and IR in general.

'This is required reading for any researcher or practitioner passionate about women in development, gender policy in post-conflict and/or institutional contexts, and gender security. This volume is a valuable contribution to our understanding of what we have achieved so far.' - Laura McLeod, Gender and Development, 19, 2011

’Funmi Olonisakin is Director of the Conflict, Security and Development Group at King's College London. She initiated the establishment of the African Leadership Centre to build the next generation of African scholars and analysts on peace and security. Prior to this, she worked at the United Nations.

Karen Barnes is Gender Project Coordinator at the OECD Development Centre. Previously, Karen lead the gender and peacebuilding team at International Alert and she is currently completing her PhD at the London School of Economics.