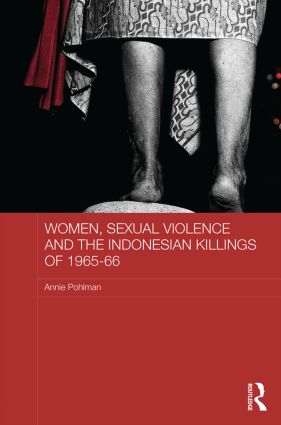 Women, Sexual Violence and the Indonesian Killings of 1965-66

The Indonesian massacres of 1965-1966 claimed the lives of an estimated half a million men, women and children. Histories of this period of mass violence in Indonesia’s past have focused almost exclusively on top-level political and military actors, their roles in the violence, and their movements and mobilization of perpetrators. Based on extensive interviews with women survivors of the massacres and detention camps, this book provides the first in-depth analysis of sexualised forms of violence perpetrated against women and girl victims during this period. It looks at the stories of individual women caught up in the massacres and mass arrests, focusing on their testimonies and their experiences of violence and survival. The book aims not only to redress the lack of scholarly attention but also to provide significant new analysis on the gendered and gendering effects of sexual violence against women and girls in situations of genocidal violence.

"Pohlman presents a convincing account of “what women were saying” and provides critical understanding in relation to sexual violence in studies of conflict and mass social turbulence. The gendered and gendering effects of sexual violence against women and girls in 1965-66 is likely to have a continuing influence on Indonesia’s contemporary history discourse regarding that period. Despite anti-communism in Indonesia still existing and being used as a general tool for the suppression of dissent, these women’s testimonies and experiences can generate public recognition and acknowledgment about what has happened and been ignored or silenced. This is the kind of book that needs to be read by Indonesians and, therefore, needs to be translated into Bahasa Indonesia." - Dewi Ratnawulan

"Women, Sexual Violence and the Indonesian Killings is a valuable contribution to the literature on the 1965 violence in Indonesia. It provides an extremely important perspective on the impact of this violence on women and girls. It attends to this topic with sensitivity and dignity. It is a difficult read at times, but it is an essential one for those interested in Indonesia’s history and politics, mass violence and atrocities, and the particular experiences of women and girls. Pohlman’s book subtly, sensitively, yet persuasively demands acknowledgement of and justice for the crimes perpetrated against women and others during this violent period of Indonesia’s past." - Hannah Loney, Inside Indonesia

1. Women and Violence following the 1965 Coup 2. Getting Caught and Being Killed 3. The Violence of Detention 4. Explaining Sexual Violence 5. Sexual Assaults During the Killings and in Detention6. Mutilation and Sexual Violence 7. Humiliation and the Strip-Searching of Women and Girls 8. Sexual Slavery and Istri Diambil (Wife-taking) 9. Conclusions

Annie Pohlman teaches in the School of Languages and Comparative Cultural Studies at the University of Queensland, Australia