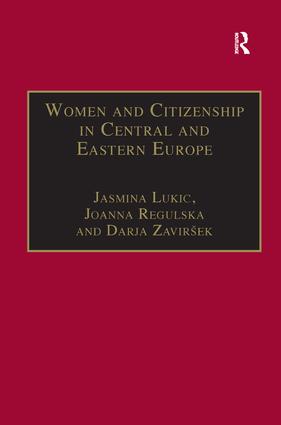 Women and Citizenship in Central and Eastern Europe

The transformations seen in women's active citizenship in Central and Eastern Europe mirror the social political and economic transformations in the region since the fall of communism at the end of the 1980s. This book challenges the universal notion of 'citizenship' by focusing on the diversity of situations women in this region have found themselves in since the end of the 1980s, looking at the challenges and struggles they have faced to assert themselves as citizens and their citizenship rights. Featuring detailed case studies which demonstrate the social and political discrimination between women that still exists, the book will be of interest to academics and post-graduate students in women's/gender studies, political sociology and European studies.

’This significant collection of essays is the product of truly transnational networking and scholarly cooperation. In demonstrating the complexity and diversity of strategies for women's agency and empowerment in the countries of Central and Eastern Europe, this volume makes a substantive contribution to discussions about participatory citizenship. It is an important sourcebook for all scholars and students of gender and democratization.’ Barbara Einhorn, University of Sussex, UK ’…an engaging book that…provides a model for scholars to discuss women’s unique role in post-Soviet transition…’ The Russian Review '… the diversity of the authors' backgrounds and of their approaches make this volume an excellent product of scholarly cooperation…' Europe-Asia Studies 'The range of contributions is admirable - the volume includes discussion of the gendered impacts of disability policies in Slovenia, gendered effects of adopting EU policies in Latvia, the experiences of exiled female Croatian novel writers and analysis of the differences between Eastern and Western European feminisim. The mix of generalized and localized contributions successfully conveys a diverse geographical area…All the writers should be congratulated…admirably readable…' International Feminst Journal of Politics ’Overall, the authors of this interdisciplinary volume deserve credit for high quality editional work, producing a thought-provoking, well written and coherent volume.’ Feminist Legal Studies