Women and Conflict in India 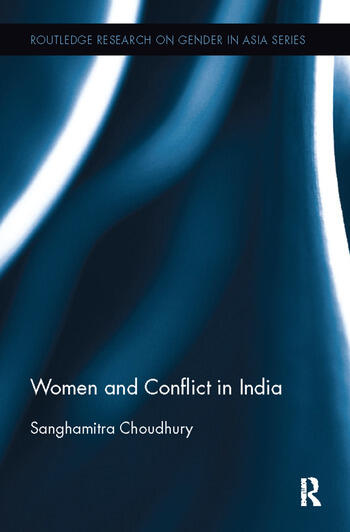 Women and Conflict in India

This book analyses the impact that prolonged socio-political conflict in India has had on political and social spaces for women. Focusing in particular on Assam in the North East of India, it looks at how the conflict can be restricting, and yet can also have the potential to expand these spaces for women owing to the collapsing of boundaries of gender roles, thereby creating niche areas that may be leveraged for socio-political transformation.

Based on empirical material collected from in-depth interviews with individuals on both sides of the conflict, the book locates the analysis in both a legal and political context. It examines the causes, dynamics and impact of the ethno-political conflicts in Assam, as well as the efficacy and outcomes of ‘capacity building’ programmes aimed at rehabilitating the surrendered militants as well as assisting affected women. The book goes on to look at the role played by civil society, especially the Mahila Shanti Sena (Women Peace Corp), towards conflict transformation. It highlights the preventive, mitigative and adaptive measures taken by the women and their role as agents of peace in the volatile zones of North East India.

Analysing the changing role of women in conflict situations, as well as the legal measures and regulatory mechanisms in place for women in vulnerable pockets of India, this book is a useful contribution to Gender Studies, Peace and Conflict Studies, and South Asian Politics.

Sanghamitra Choudhury is Assistant Professor in the Department of Peace and Conflict Studies at Sikkim University, India, and is currently a Post-Doctoral Fellow at the University of Oxford, UK. Her research interests include Gender and Peace Building, Human Rights, Folklore and Identity Issues and Movements in India.

‘By putting gender at the centre of her analysis of the multiple histories of conflict in India's northeast, Sanghamitra Choudhury allows us to see them in a fresh new way, as well as to point to novel possibilities of conciliation in the region. This is a complex and nuanced account.’

‘Sanghamitra Choudhury’s work on "Women in Conflict Situations" harnesses strong reflects and a critical probe into the struggle for third world’s survival and security. Based on extensive field work and firsthand knowledge of the area, where she belongs to, the work incorporates the issues of conflict, identity and autonomy of women in violent armed conflict, with a critical eye, nestling it with questions of social injustice, equality and peace. Her work is a major contribution to the long neglected injustice and alienation and an appropriate response for human conflict in North East India.’

‘Dr Sanghamitra’s work on the role of women in conflict situations is an excellent treatise. The study highlights the various roles played by the women during an internal armed conflicts and how they can be targeted by both the state as well as non-state actors. With the stunning display of academic mastery, Dr Sanghmitra provides details of cases examined by her. The author has brought out very useful and pertinent suggestions which would be of immense value to policy makers.’