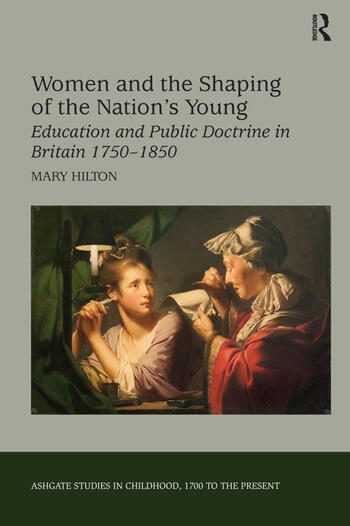 Women and the Shaping of the Nation's Young: Education and Public Doctrine in Britain 1750–1850

Researchers have neglected the cultural history of education and as a result women's educational works have been disparaged as narrowly didactic and redundant to the history of ideas. Mary Hilton's book serves as a corrective to these biases by culturally contextualising the popular educational writings of leading women moralists and activists including Sarah Fielding, Hester Mulso Chapone, Catherine Macaulay, Mary Wollstonecraft, Hannah More, Sarah Trimmer, Catharine Cappe, Priscilla Wakefield, Maria Edgeworth, Jane Marcet, Elizabeth Hamilton, Mary Carpenter, and Bertha von Marenholtz Bulow. Over a hundred-year period, from the rise of print culture in the mid-eighteenth century to the advent of the kindergarten movement in Britain in the mid-nineteenth, a variety of women intellectuals, from strikingly different ideological and theological milieux, supported, embellished, critiqued, and challenged contemporary public doctrines by positioning themselves as educators of the nation's young citizens. Of particular interest are their varying constructions of childhood expressed in a wide variety of published texts, including tales, treatises, explanatory handbooks, and collections of letters. By explicitly and consistently connecting the worlds of the schoolroom, the family, and the local parish to wider social, religious, scientific, and political issues, these women's educational texts were far more influential in the public realm than has been previously represented. Written deliberately to change the public mind, these texts spurred their many readers to action and reform.

Contents: Introduction. Part I The Young Citizen: Issues of Enlightenment, Gender, and Virtue: Manners, patrimony, gender: education in mid 18th-century England; 'Wiser and better': constructing a rational piety for girls; 'Partizans of liberty and necessity': forming the enlightened citizen; 'An honourable distinction': enriching the familial culture of rational dissent; 'Nature's coyest secrets': enlarging the sphere of ideas. Part II Vice and Misery: Educating the Young in the Counter Enlightenment: 'The paths of religion and virtue': reaching and teaching the children of the poor; Schemes of salvation: instructing the young in piety and economy. Part III Childhood Contested: Social and Educational Reform in the Mid 19th Century: 'One human family': rescuing the children of the 'dangerous and perishing classes'; 'The elevation of child nature': planting the English kindergarten. Conclusion: the long conversation; Bibliography; Index.

Mary Hilton is a University Lecturer in the Faculty of Education at the University of Cambridge, UK.

'Mary Hilton's comprehensive cultural history convincingly makes the case that women intellectuals of the eighteenth and nineteenth centuries enlarged and shaped the terms and outcomes of public debates about educating Britain's children. Her highly readable yet learned volume should be of great interest to scholars of social, political and educational history.' Lynne Vallone, Rutgers University, USA ’There is little doubt that Women and the Shaping of the Nation's Young is a thoroughly researched, valuable and welcome addition to our knowledge and understanding of both the history of education and thought, and to the hidden power which women wielded in society between the mid-eighteenth and mid-nineteenth centuries.’ Children's Books History Society Newsletter